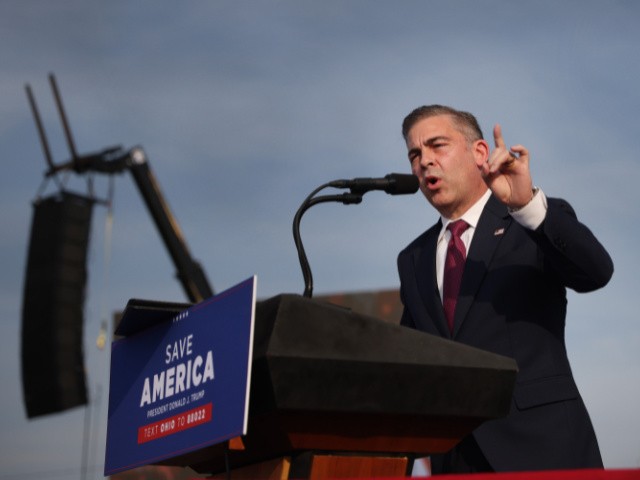 NBC News projected at 9:31 p.m that Carey would win the race. The election results come as no surprise; the Cook Report’s Partisan Voter Index from 2020 marked the district as an R+9, meaning there are nine percent more Republicans in the district than any other party.

Additionally, in 2020, former Rep. Steve Stiver (R-OH) — who stepped down earlier this year to become the president and CEO of the Ohio Chamber of Commerce — won the congressional district with over 63 percent of the vote.

Former President Donald Trump, who endorsed Carey, released a statement: “Congratulations to Mike Carey on a fantastic victory in Ohio. I am very proud to have endorsed him early and strongly. He will be a great congressman!”

“Ohio voters resoundingly rejected Democrats’ socialist agenda focused on defunding the police, raising taxes, and enabling the crisis along our southern border. I look forward to serving alongside Mike in Congress,” Emmer added.

The Republican National Committee (RNC) Chairwoman Ronna McDaniel released a statement saying, “Congratulations to Mike Carey on a hard fought campaign and a huge win for the people of Ohio! Joe Biden tried to parachute into the race, but Ohioans vehemently rejected his far-left agenda.”

“The Republican National Committee and Ohio GOP’s permanent, data-driven ground game will continue to be a dominant force in Ohio and across the country to help secure Republican victories in the 2022 midterms,” McDaniel added.

“I was proud to join President Trump in endorsing Mike in his primary, and I look forward to working with Mike in Congress to make America more prosperous and free,” she added.

“Congratulations to the newest Congressman from #OH15, @MikeCareyOH15!” the NRCC tweeted.

“Fantastic work from start to finish. Congrats to @MikeCareyOH15 and his team on their impressive victory. Can’t wait to work with you in the People’s House. #FirePelosi #RedWave,” House Minority Leader Kevin McCarthy (R-CA) tweeted.