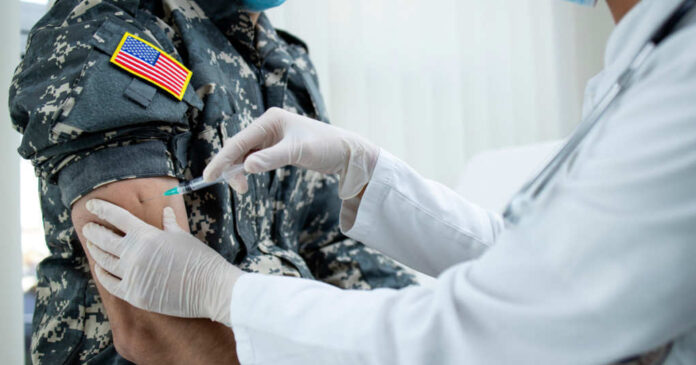 Imagine deciding that you don’t want the COVID vaccine. It goes against your beliefs. You fear that the “science” isn’t all that the government promised. Then, when you go to get another vaccination that is required, you find out that you were jabbed with the COVID vaccine after all.

This might be happening more often than you realize…especially for those in the military.

We already know that thanks to Biden’s mandate, vaccines are being required of everyone who wants to maintain their military career. However, people still have a bit of time to decide if they want the jab or if they’d rather move on from the military once and for all.

At the Lewis Main Exchange on the Joint Base of Lewis-McChord in Tacoma, Washington, there’s an investigation going on to find out how three people were “accidentally” given the COVID vaccine.

According to Colonel Joey Sullinger, “Joint Base Lewis-McChord is aware three people were inadvertently administered the Pfizer COVID-19 vaccine instead of another vaccine at the Lewis Main Exchange.”

This is quite the accident when you think of it. On the vial of every vaccine, it lists what it is. It’s to ensure something like this doesn’t happen.

Sullinger says that “Positive corrective action has been taken at this vaccination site to prevent such errors from happening again.” The incident is also under investigation.

Still, though. Imagine how easy it would be for the Army to ensure that everyone gets vaccinated. One minute you think you’re getting the flu shot and the next minute, you’re being told that there was an oops. Instead of being protected against the flu, you have the Pfizer vaccine coursing through your body.

The Army has not released the identities of the people involved or the type of vaccine they were supposed to get.

The Department of Defense, as of October 21, has reported that they’ve had 248, 865 cases of COVID across their services – and 1282 new reports from October 13 through October 20. When you look at these numbers versus the number of people who are employed by the Department of Defense, it’s hardly a cause for concern. Additionally, the majority of people who have had COVID within the military have also experienced a full recovery.

Yet, the Biden administration doesn’t want to look at those statistics.

They don’t want to be told that their vaccine mandates are completely ridiculous. As such, they don’t track certain statistics. Otherwise, it would all blow up in their faces. After all, why would we want to pressure the military to get a vaccine that may or may not actually protect them? With so many cases of people getting COVID even after being vaccinated, it’s clearly not the level of protection that it was supposed to be.

Meanwhile, the details of this story are troubling. How does one “accidentally” get the wrong vaccine? And, are we going to see this with greater frequency?

If more stories like this pop up, the federal government will find that Americans aren’t just going to stop getting the COVID vaccine. They’ll stop getting all vaccines in fear that there will be another “accident.” Fool me once, shame on you…fool me twice, shame on me.