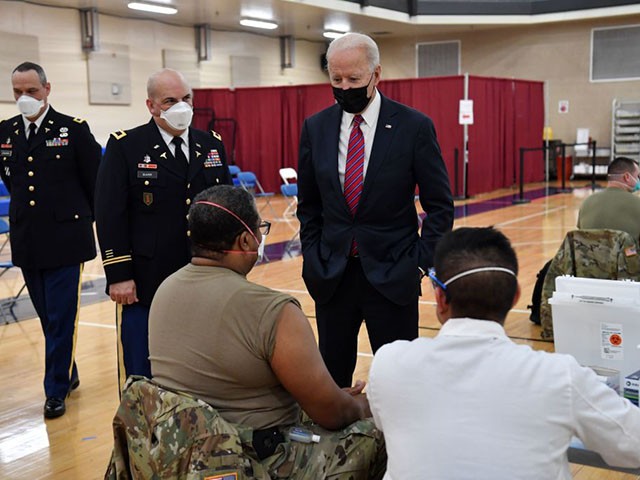 Next Thursday is Veterans’s Day, a day that we stop, that this nation pauses, to honor our veterans. Our president instead is choosing to dishonor our military active duty officers by forcing them to be separated from the military and then pushing upon them a dishonorable discharge.

Defense Secretary Lloyd Austin in late August ordered the coronavirus vaccine to be mandatory for all service members. Since then, the Pentagon has repeatedly warned that service members who do not comply with the order could face disciplinary action and potential discharge.

Service members are allowed to apply for religious accommodations to be exempt from the mandate, but no requests have been approved, according to the New York Times.

Berry, a Marine lieutenant colonel reservist who is representing about 40 SEALs, said:

As a veteran, I can say that when you raise your right hand and you swear the oath to support and defend the constitution, you certainly give up some of your freedoms. We all recognize that, but you do not give up your religious freedom when you serve this country. And yet that is exactly what First Liberty Institute clients are facing today is the loss of their religious freedom. Being forced to choose between their faith and serving this country.

This is a time in our nation’s history when we face great real threats from China, North Korea, Iran, Russia. And we should expect that every one of our able bodied SEALs and other service members — we want them defending this nation fighting for our freedom. And instead they’re fighting for their lives and their careers. That’s un-American and that’s wrong.

After House Republicans successfully included a provision that would ban dishonorable discharges for service members not complying with the mandate in the House version of the 2022 National Defense Authorization Act, the Biden White House issued a statement saying they opposed it.

The Biden administration released a Statement of Administration Policy on September 21 that said the provision, authored by Rep. Mark Green (R-TN), “would detract from readiness and limit a commander’s options for enforcing good order and discipline when a Service member fails to obey a lawful order to receive a vaccination.”

“To enable a uniformed force to fight with discipline, commanders must have the ability to give orders and take appropriate disciplinary measures,” the White House statement said.

Scott, a Navy veteran, said he “never imagined that my federal government that I took the oath to defend the freedom of…would come back and say, if you don’t put something in your body that you don’t feel comfortable with…, adding:

Look, I took the vaccine. I’ve had COVID, but [saying], ‘If you don’t do this, then…we’re going to kick you out of the military’… This is disgusting. It’s wrong. It needs to stop. Joe Biden needs to start standing up for the men and women of our military instead of trashing them and tell him he’s going to ruin their lives.”

Wicker, a retired Air Force lieutenant colonel, said the mandate would lead to losing the “best and brightest and our bravest.”

“Our commander in chief is grossly miscalculating the will of the American people. And not only is he going to create a crisis in the United States military, but [to] small businesses and to businesses that would contract with the federal government,” Wicker said.

Cramer said he has been hearing from his constituents who serve in the military, as well as some mothers of those serving.

“They’re very concerned about this. It’s not a trifling matter to them. This is not some just sort of a macho standoff. This is heartfelt conscientious liberty issue. I mean, this is a big deal to them,” he said,

He added that troops with dishonorable discharges cannot re-enlist in another branch or own firearms or ammunition, and in some states, they lose their voting rights.

“This is a big issue. It is a big deal. It’s going to make our nation less secure, probably over 50% of our enlisted soldiers in the national guard, the army reserve have not had the vaccine yet,” he said, adding:

Thousands of other people that are active-duty have not had the vaccine yet. And these are, these are based upon religious convictions. Yesterday I sat down with an active duty Navy SEAL officer and said, ‘Tell me why you don’t want the vaccine.’ He went through a very deep spiritual context of his faith-based decision, prayer and thought, and that was his conclusion.

“And I’m not saying that I would follow his logic perfectly, but I respect his faith and his ability to make that decision. And just like one size doesn’t fit all,” he said. “We should respect their religious freedoms. You don’t give that up when you go in the military.”