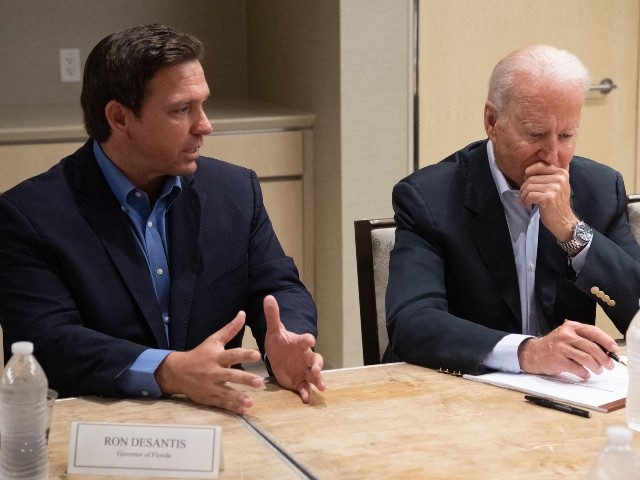 “Florida needs new worker protections enshrined in the law,” the governor’s office exclusively told Breitbart News. “We are pleased that the leadership of the state legislature shares this objective and has proposed reforms that we are confident will protect Floridians’ livelihoods and constitutional rights.”

The specifics of what the Republican-controlled legislature plans to propose still remain unknown. But DeSantis sent a memo to the legislature in October, requesting that the safety net includes unemployment assistance, workers compensation, and non-compete exemptions.

“Mandating the vaccine cannot stop the spread or ensure a COVID-free workplace, because vaccinated people can still get and spread the virus,” DeSantis’ office told Breitbart News. “It’s clear that this mandate isn’t about science or health – it’s about control and social engineering.”

While DeSantis has asked the legislature to create a safety net for unvaccinated employees who find themselves terminated, the legislature has not signaled they will ban vaccine mandates on private businesses altogether, “as Texas lawmakers tried and failed to do this month when faced with business opposition in that state,” the Tampa Bay Times reported.

“We’ve always been against government mandating what business can do and can’t do,” executive director of the Florida Chamber of Commerce Mark Wilson told the Times. But “[w]e’re not asking for legislation,” Wilson noted.

The Chamber is just “interested in the conversation” during the special session, he said.

Regardless of whether the Republican-controlled legislature, lead by state Rep. Chris Sprowls (R-Palm Harbor), acts on banning the mandates, DeSantis’ office told Breitbart News the governor will challenge the orders in court, including Thursday’s proposed rule by Occupational Safety and Health Administration (OSHA) that clarifies President Joe Biden’s mandate.

The OSHA rule intends to force nearly 100 million workers across the nation to get the jab. If employees do not comply with the mandate, companies with more than 100 employees will be fined $14,000 for each violation, which could increase to $136,532 for repeated violations, Breitbart News reported.

The agency is also weighing how to expand the vaccine mandate to companies employing less than 100 workers. OSHA noted, however, they are “less confident” smaller companies could withstand losing employees due to forced vaccinations.

DeSantis will not only sue OSHA for government overreach. The governor has already sued to protect federal contractors who work for Florida’s aerospace sector.

“The State of Florida has filed a lawsuit to challenge the Biden Administration’s vaccine mandate for federal contractors, and Florida was the first state to do so,” DeSantis’ office told Breitbart. “Many Floridians, particularly in the aerospace industry, work for federal contractors and have reported that their religious and medical exemptions are being rejected. This is unconscionable.”

Far-left Democrats are also singing a similar tune, eager to see DeSantis’ special session fail. Democrat House co-leader Evan Jenne stated November 1 the big business community, like woke Disney, which has heavy influence within the legislature, may seek to reduce the impact of the session altogether.

“I have a feeling that some business entities that may be quite important to folks in this building have said, ‘Hey, we don’t appreciate what you’re doing here,'” Jenne told reporters. “So I think you’re going to see that scale back a little bit.”