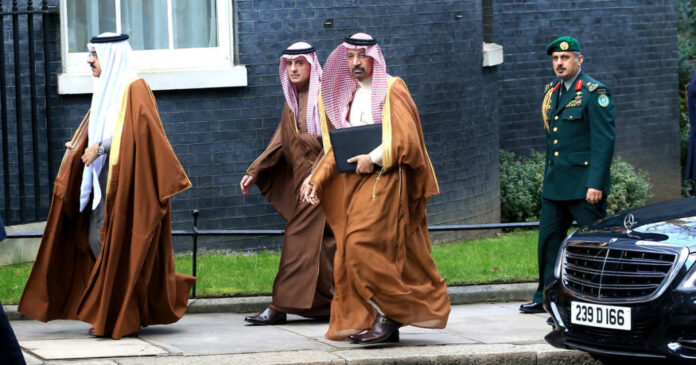 In 2018, journalist Jamal Khashoggi was hacked to death by a group of men inside of the Saudi consulate offices in Istanbul. His body parts were placed in separate garbage bags and distributed in dumpsters around the city. The man responsible for approving Khashoggi’s dastardly death, though the entire world knew he was guilty, got off the hook by saying he didn’t do it. That man is Saudi Arabia’s crowned prince Mohammed bin Salman.

Saad Aljarbi, an ex-Saudi intelligence official now living in Canada, spilled the beans about just how insane the crowned prince is in a recent interview aired on “60 Minutes.” Aljarbi began by speaking about a video he watched in which MBS and his cousin Mohammed bin Nayef, Saudi head of intelligence, talked about killing the now-late King Abdullah in 2014.

Aljarbi said, “He (MBS) told him (Nayef), I want to assassinate King Abdulla. I get a poison ring from Russia. It’s enough for me just to shake hands with him and he will be done. That what he say. Whether he’s just bragging or, but he said that and we took it seriously.”

In Jan 2015, at age 90, when King Abdulla ascended into Muslim heaven, his half-brother King Salman, the crowned prince’s father, plopped his butt in the kingly chair. A power struggle developed between MBS and his cousin Nayef over who should wear the title of crowned prince.

As a result, Nayef was deposed and told to go to his home where he continues to live under house arrest to this day. Aljarbi had worked closely by Nayefs’ side for a number of years in his capacity as Saudi Arabia’s number two ranked intelligence officer.

Aljarbi said that after he was exiled MBS ordered two of his children, Sarah and Omar, to be arrested on bogus charges. They’re still in prison. He also learned that in 2018 MBS had been making plans to send a team of killers to Canada to give him the Khashoggi treatment, but for reasons unknown to him called off the hit.

The warning that MBS was out to get him came only days after the Khashoggi butchering. He said he was told by unrevealed sources, “don’t be in a proximity of any Saudi mission in Canada. Don’t go to the consulate. Don’t go to the embassy. I said why? Said, they dismembered the guy, they kill him. You are on the top of the list.”

A spokesperson for the Canadian government more or less verified Aljarbis’ claim. “While we cannot comment on specific allegations currently before the courts, we are aware of incidents in which foreign actors have attempted to monitor, intimidate or threaten Canadians and those living in Canada,” he said.

Saudi Arabian officials were given a chance to negate Aljarbis’ words but refused to do so. They let their embassy in D.C. do their talking for them. In an issued statement the embassy said:

“Saad Aljabri is a discredited former government official with a long history of fabricating and creating distractions to hide the financial crimes he committed, which amount to billions of dollars, to furnish a lavish lifestyle for himself and his family. He has not denied his crimes; in fact, he implies that stealing was acceptable at the time. But it wasn’t acceptable nor legal then, and it isn’t now.”

So who are you gonna believe? We’re going with Aljarbi on this one. How about you?