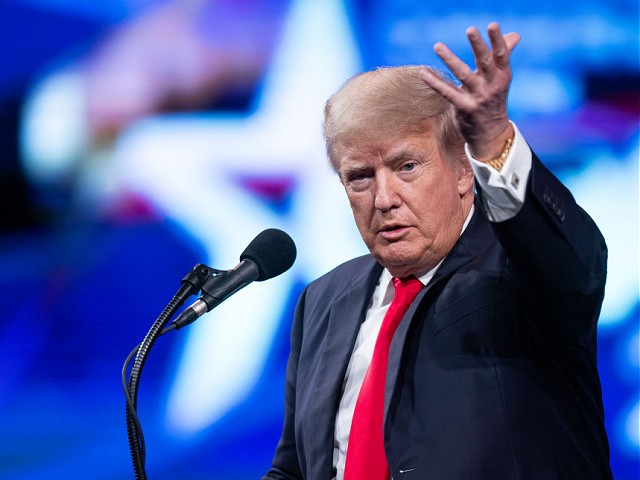 “Very sad that the RINOs in the House and Senate gave Biden and Democrats a victory on the ‘Non-Infrastructure’ Bill,” Trump wrote in a statement.

Trump claimed that only 11 percent of the spending in Biden’s $1.2 trillion bill goes toward “real infrastructure.”

He criticized the 19 Republican senators who helped Biden’s infrastructure bill pass the Senate in August and the 13 Republican representatives who helped push the bill across the finish line in the House late Friday.

U.S. President Joe Biden and Speaker of the House Nancy Pelosi leave a meeting with House Democrats at the U.S. Capitol on Capitol Hill October 28, 2021 in Washington, DC. (Photo by Drew Angerer/Getty Images)

“How about all of those Republican Senators that voted thinking that helping the Democrats is such a wonderful thing to do, so politically correct,” Trump wrote. “They just don’t get it!”

The former president warned that Biden and Democrats in Congress would only be empowered to push additional spending.

Trump said that Republicans voted for “Democrat longevity” and “should be ashamed of themselves.

He also criticized Sen. Mitch McConnell for caving on the debt limit, allowing Democrats time to plan their political future at “our Country’s, and the Republican Party’s, expense!”