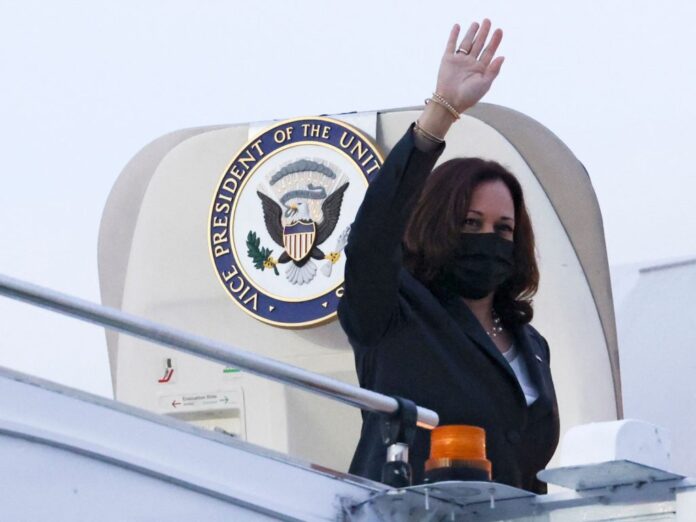 The visit to France, Harris’s third overseas foray as vice president, will see her attend the Paris Peace Forum to discuss “global governance issues” with other international government representatives.

She will also use the visit to participate in a conference on Libya, where she’s expected to encounter some two-dozen other world leaders, NPR reports.

“This is a great opportunity for her to continue to develop her partnership, not just with [French] President [Emmanuel] Macron, but with what we expect will probably be 25 other world leaders,” a senior administration official told reporters on a preview call about the trip.

She is yet to make the much shorter trip south to the Mexico-U.S. border.

The official said the U.S. and France are taking a “forward-looking” approach to the bilateral relationship and Harris is looking to advance cooperation between the two nation “in concrete ways.”

Harris will deliver an address to the Paris Peace Forum, a conference that focuses on global governance issues, on Nov. 11. “You can expect the vice president in her speech to focus her remarks on some big, converging global crises … in particular, the challenge of rising inequality and the need for leaders around the world to join together and take bold action,” a second administration official told reporters, NPR outlined.

Just three days ago Kanye West called out Harris in an interview, questioning the whereabouts and work ethic of the seldom-seen vice president, as Breitbart News reported.

The billionaire fashion mogul — who has legally changed his name to Ye — posed his questions during an extensive interview on the Revolt TV show,

“I need Black Future Month. I need Black Possibility Month. I’m tired of seeing us getting hosed down. I’m tired to talking about slavery and how we should only be so lucky to vote for a woman we ain’t seen since the election,” the hip-hop icon and fashion designer said about Harris.

Some 24-hours earlier Harris attempted to spin last Tuesday’s crushing election defeats for the Democratic Party as some sort of triumph.

“We had great wins… and I celebrate those,” she said to reporters on Capitol Hill. “We’ll keep doing what we need to do.”

When asked about the massive losses in Virginia and Republican competitiveness in New Jersey, Harris replied she would “leave it up to the pundits.”

Harris then pointed to Eric Adams’ New York City mayoral race and the special election in Ohio’s 11th district as evidence of the “great wins.”