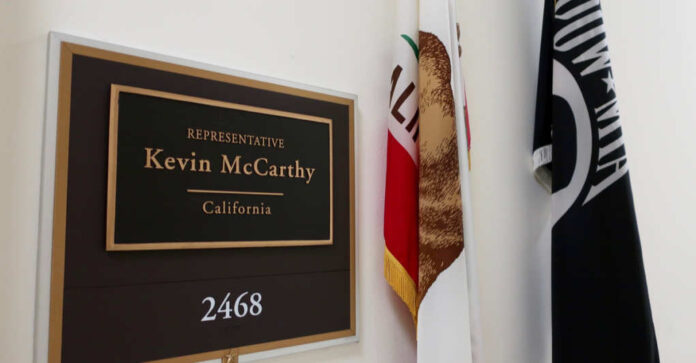 Kevin McCarthy (R-CA), the House Minority Leader, gave a dire warning to House Democrats on Wednesday. This came after Republicans scored a huge victory in Virginia. He said that they could lose a massive amount of seats in the coming 2022 mid-term elections.

It was reported in The Washington Post that House Minority Leader Kevin McCarthy predicted on Wednesday that Democrats may lose as many seats in the mid-term elections next year as they did the last time that Nancy Pelosi (D-Calif.) lost her speakership.

It was in the 2010 elections that House Democrats lost a total of 63 seats. And McCarthy said at a press conference on Capitol Hill that it could be more competitive this time around.

The Washington Post noted that Biden won New Jersey by over 16 points last year. But as the vote counts were taken on Tuesday, the Republican challenger and the Democratic incumbent governor were separated by a razor-thin margin. And as it turned out, the Democrats only won with a very narrow lead.

“If you’re a Democrat and President Biden won your seat by 16 points, you’re in a competitive race next year,” McCarthy told reporters. “You are no longer safe.”

He also told reporters that more than 70 seats will be competitive and many are going to lose in their races because they will walk off a cliff as Nancy Pelosi pushes them.

“She may not care if she loses. She lost 63 the last time she was Speaker moving policy that the country didn’t care for. Many believe she won’t stay around” in Congress, McCarthy said. He also told Democrats that Pelosi was not going to be there to defend them.

McCarthy had even more to say to his colleagues. He talked about President Biden’s social agenda stating that the defeat of Democrats on this election night should be a “wake-up call” for Capitol Hill to abandon the partisanship and the extremist agenda of a Washington-based program that costs trillions of dollars.

He questioned that if they continued to push these policies it could be one of the biggest election losses for Democrats. The GOP win in Virginia and the neck and neck race in New Jersey have set up the framework for Republicans as they move toward the midterm elections next year.

Dave Wasserman, the Cook Political Report’s House editor, tweeted this message, “Needless to say, tonight’s results are consistent w/ a political environment in which Republicans would comfortably take back both the House and Senate in 2022.”

Needless to say, tonight’s results are consistent w/ a political environment in which Republicans would comfortably take back both the House and Senate in 2022.

McCarthy and his GOP conference will be focusing on replicating the Youngkin victory in congressional races across the country next year. They will return to issues such as mask mandates and public school curriculum to try to enliven the base and bring GOP turnout.

Elise Stefanik, the House Republican Conference Chairwoman, said that they learned that parents should be empowered to make decisions about their children’s education, not the federal government.

They learned that people in America want jobs, not more government welfare and spending that creates inflation. And Americans want to fund their police, not defund them. She said that “Americans want freedom, not far-left socialism.”