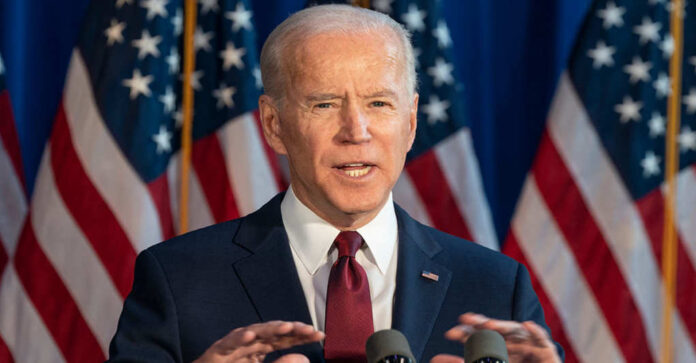 We all know President Biden is as useless as tits on a bull. Now he can’t even get people to work thanks to his lovely plans for free money to keep people out of work, and his inability to get large-scale employers to pay real wages for their employee’s hard work.

Additionally, the smaller mom-and-pop businesses have found themselves being pushed out of the economy through mandates and forced closings. Their leases and taxes didn’t stop when the pandemic forced them to close, and now many are out of business. As all this occurs, inflation is skyrocketing, and people everywhere are finding themselves consistently doing more with less.

Given how quickly inflation can rise and how slowly it lowers, we are finding ourselves in very perilous territory, and Biden is the cornerstone for all these problems.

As the U.S. Labor Department outlined on Thursday “Nonfarm business sector labor productivity decreased 5.0 percent in the third quarter of 2021, as output increased 1.7 percent and hours worked increased 7.0 percent. This is the lowest rate of quarterly productivity growth since the second quarter of 1981, when the measure decreased 5.1 percent.”

Let’s break this down a bit.

As defined by the U.S. Bureau of Labor Statistics “Labor productivity is defined as real output per labor hour, and growth in labor productivity is measured as the change in this ratio over time. Labor productivity growth is what enables workers to produce more goods and services than they otherwise could for a given number of work hours.” In other words, people are doing less with the time they are working.

Many could simply blame this on a lack of automation, or people not wanting to work at full speed. The fact of the matter is this is a result of Biden’s COVID restrictions on people working via vaccine mandates, a time of ongoing hyperinflation, and businesses making do with less incoming supplies. All of this comes back to Biden and his actions (or lack thereof).

WTF DOES THE BRANDON ADMINISTRATION THINK IS GOING TO HAPPEN WHEN THOUSANDS ARE FIRED?

What he does know is how to disrespect fallen servicemembers and their families. He knows how to turn a state back to the Republican side. He knows what policy ideas the left will love. Unfortunately for him what he knows is proving costly for his party as well as the American people.

As we now get ready for the 2022 midterm elections, the hope for more change is on the horizon. Biden and his cronies already flipped Virginia, New Jersey, and got a mayor in Buffalo to retain his position as mayor via write-in votes after an AOC endorsement, and many other untold local fips. This man’s actions are equally as supportive of the Republican party’s election hopes as he is an anchor through the deck for the Democrats.

He’s torpedoed the labor rate, made the U.S. look like fools on a global stage, and has Australian media even doubting his mental capacity. This is not a good look for America right now, and as our businesses continue to fail he just keeps plugging along making mistakes. As funny as the blunders may be to snicker at, this is no laughing matter. It makes us look weak, and it calls into question the legitimacy of the U.S as a global superpower.

As well all remember from the playground days it is the dumbest, weakest, and most irresponsible that get the bullies’ attention the best. Right now Biden is looking like a big target.