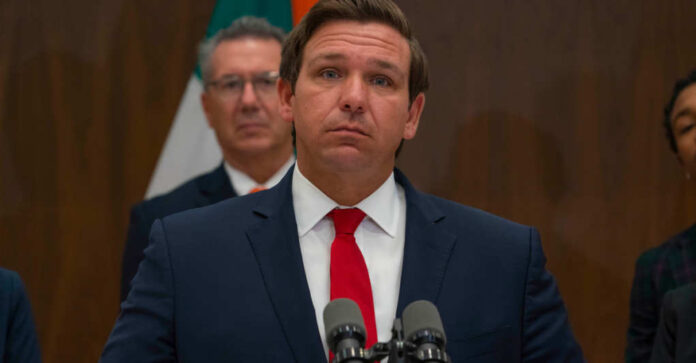 Everyone knows that election integrity has been a major concern over the last year, and for good reason. States like Georgia and Texas have passed laws to ensure that future elections will be more secure and fraud harder to achieve.

But Florida, with their conservative and hard-hitter of a governor, Ron DeSantis, is about to take things to a whole new level. Not only are passing laws to protect voter integrity and security. But now, they are going to try to create an entirely new crime division or unit whose sole purpose is to investigate and solve cases of voter fraud.

On Wednesday, DeSantis announced that beginning in January, with the beginning of the state’s upcoming legislative session, his office will be introducing the creation of the Office of Election Crimes and Security.

And should the bill be passed and the office instated, a specialized law enforcement unit will be assigned to it to handle any supposed crimes as soon as they occur.

DeSantis said, “I am excited that with this legislation, our state will be able to enforce election violations, combat voter fraud and make sure violators are held accountable.” And he believes the mere existence of the new office will strongly help to deter those even thinking about committing such crimes.

“If potential violators know they will be held accountable, they will be much less likely to engage in improper conduct in the first place.”

Election integrity is a top priority in Florida, which is why I am calling on the Florida Legislature to take additional steps to safeguard our elections. pic.twitter.com/jCd3ECPYFb

But just in case some foolhardy soul decided to break the election laws in the state, DeSantis vows that they will be ready to make them pay. And according to him, it won’t just be a slap on the wrist. Instead, it sounds as though he plans to make an example of them.

He told the press that the “first person that gets caught, no one is going to want to do it again after that.”

Now, to be clear, Florida doesn’t usually have a lot of problems with voter fraud or election-related crimes.

As the state’s Secretary of State Laurel Lee says, that’s in part due to DeSantis’ “strong leadership” and willingness to encourage election security.

However, with the introduction of the new anti-crime elections office, she knows elections in the Sunshine State will be made even better and crime less possible or likely.

In the meantime, Lee says the state will soon be launching an Elections Integrity website, designed to not only make the public aware of current and proposed voting laws and processes but give them a place to voice their concerns.

Should a voter find something fishy or questionable at the polls, on a ballot, or just notice some behavior from other voters that may be a sign of election fraud, they can report those instances on the site as well. Law enforcement and election officials will then be able to check the site regularly for any new concerns or fraud claims and see to them as the law allows.

Among other things, DeSantis says he’d like to see all ballot drop boxes nixed, as well as the sketchy practice of ballot harvesting, which is common in more liberal states such as California. When talking about the proposed legislation, he encouraged voters to report every instance of ballot harvesting they see or suspect is going on.

He added that with this special office and law enforcement unit in place, election crimes in the state would be handled in a much timelier manner. Currently, local police must add those crimes to their already long lists of crimes committed. And in far too many cases, if not most of them, they aren’t solved until long after the election is over.

But with an office and officers whose sole purpose is to handle these matters as they happen, perhaps voter confidence and trust can finally be restored, at least in the state of Florida. There will be no wondering if their votes weren’t counted, double-counted, or altered in favor of another candidate than the one they intended.

Now, if only every other state would put forward and pass something like this.