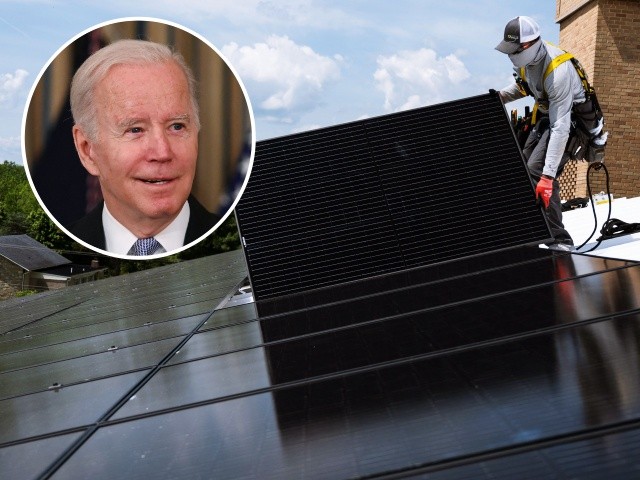 This week, the Biden administration crushed a campaign by American solar manufacturers to ensure tariffs were imposed on products made by Chinese solar manufacturers who have shifted their production to other nearby foreign countries to avoid U.S. tariffs.

“The Commerce Department’s unwillingness to investigate illegal circumvention by Chinese solar companies is a gift to the Chinese Communist Party that comes at the expense of American companies and American workers,” Coalition for a Prosperous America (CPA) CEO Michael Stumo said in a statement:

President Biden promised to create 10 million green new jobs. Instead, this decision ensures that China’s use of Uyghur forced labor in Xinjiang to manufacture polysilicon will continue. The Biden administration claims to want to Build Back Better and boost U.S. domestic manufacturing but a decision like this that only benefits the Chinese Communist Party is a serious red flag that the Build Back Better initiative is nothing more than a slogan. [Emphasis added]

The American Solar Manufacturers Against Chinese Circumvention, made up of a number of domestic manufacturers, filed a petition in August, asking the Biden administration to review whether Chinese solar manufacturers were illegally avoiding tariffs by moving production to Malaysia, Thailand, and Vietnam.

Biden had been lobbied by 12 Senate Democrats who sent a letter asking the administration not to impose any tariffs on the products made in Malaysia, Thailand, and Vietnam by the Chinese solar manufacturers.

“New tariffs on solar products from these three countries would stall many ongoing and planned U.S. solar projects, negatively impacting every segment of the U.S. solar industry and resulting in significant job losses,” the Senate Democrats wrote.

The move, lobbying by Democrats, and voters from 32 House and Senate Republicans who backed Biden’s infrastructure bill, underscores the commitment to foreign imports and offshoring manufacturing among both political establishments.

The infrastructure bill, for instance, provides huge “Buy American” waivers to industries that can produce materials for projects overseas rather than in the U.S. so long as they get approval from federal agencies.

The total U.S. goods trade deficit in 2020 hit a record $915.8 billion. Research shows that every $1 billion in imports from a foreign country to the U.S. leads to American job losses. Meanwhile, American manufacturing remains vital to the U.S. economy, as every one manufacturing job supports an additional 7.4 American jobs in other industries.