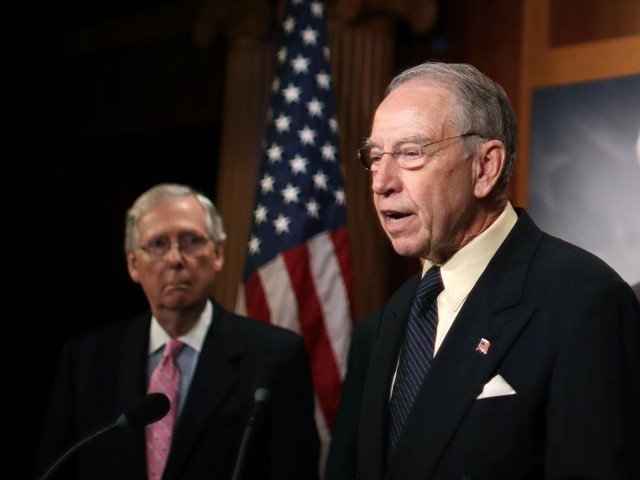 Biden’s Department of Justice (DOJ), Department of Homeland Security (DHS), and Health and Human Services (HHS) are working to settle with a number of border crossers represented by the ACLU, who claim they have suffered trauma as a result of the Zero Tolerance policy.

As part of the settlement, attorneys with the DOJ, DHS, and HHS are considering a plan that would give each border crosser about $450,000 and family units about $1 million. The total cost of the payouts would reach $1 billion.

In a letter to Attorney General Merrick Garland, McConnell and Grassley call the payouts “outrageous” and ask, “Are these settlements under consideration or are they not?”

“It should not surprise you to learn that we find these reports outrageous. Any settlements to illegal aliens because they violated the law are wrong. These kinds of settlements are offensive to the American people,” McConnell and Grassley write:

Do you intend to stand with the ACLU and go forward with these massive settlement payments? Or have you complied with President Biden’s instruction and decided to seek settlement amounts for illegal aliens that the White House finds more politically palatable? [Emphasis added]

Are these settlements under consideration or are they not? And if your response would be that the Justice Department does not comment on ongoing settlement negotiations, we note that President Biden and the ACLU already have. Where is the Department of Justice? This matter demands clarification. [Emphasis added]

A recent Rasmussen Reports survey found that 67 percent of swing voters, 79 percent of Republicans, 81 percent of conservatives, 51 percent of moderates, and 57 percent of all likely voters oppose the payouts to border crossers.

Meanwhile, a survey from the National Republican Congressional Committee (NRCC) showed that 63 percent, including 72 percent of swing voters, said they oppose “paying $450,000 for ‘psychological trauma’ to every illegal immigrant who was separated from their child when illegally entering the United States.”

As Breitbart News has noted, the $450,000 payouts to border crossers would far exceed the compensation provided to the victims of the September 11, 2001, Islamic terrorist attacks and of the Boston Marathon bombings.

In addition, analysis by the Federation for American Immigration Reform (FAIR) calculated that the single payout for a border crosser under the proposal could feed 42 American families for an entire year.

Meanwhile, the total cost of the payouts could provide homes to nearly 80,000 homeless Americans for a year or could forgive student loan debt for more than 27,000 American college students and graduates who are struggling to move up the economic ladder.