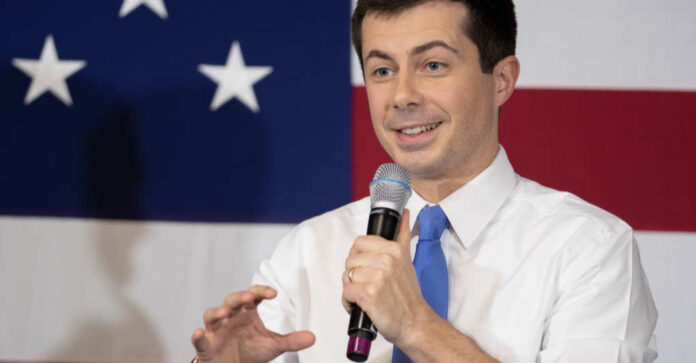 Did the transportation secretary really say he was going to “deconstruct roads”? Well, the answer to that is yes and no, both better and worse than that idea. Let me expand: As many of you likely know, the Transportation Secretary is former South Bend Indiana Mayor Pete Buttigieg, and to say that he’s progressive would be like saying that the Pope is religious.

As if he didn’t make enough waves when he took off after he and his husband adopted a child for paternal leave (which is a great thing, unless the weight of the nation’s food supplies depend on you doing your job) and the crisis of cargo ships being unable to reach their goods to distribute them to the American people. It’s been a growing problem, and the question is, what is the government going to do about it?

If we look at the situation from a standpoint of entirely discounting the possibility of anyone in government wanting Americans to suffer, assuming there’s not a master plan to suppress anyone into submission, and just assume that those working in the White House are misguided but good in spirit, it’s still a crippling level of naivety that would allow someone like Buttigieg to think that he would be concerned about racism in roadways rather than the weakening dollar, the rising crisis of supply shortage and how to fix the emergency amongst truck drivers.

So, it’s with a suspect attitude and injured heart that Americans have been reading reports, like this one out of the Independent Journal Review that the Biden administration’s transportation secretary is working on a plan to “deconstruct” racism that was “built into” roadways.

During a press briefing on Monday, the White House correspondent for The Grio, April Ryan, put a question to Buttigieg about how the administration planned to deal with this apparently growing problem of “racism” amongst the pavement groupings of America:

“Can you give us the construct of how you will deconstruct the racism that was built into roadways that you talked to The Grio [about] earlier when you broke that information with us? Can you talk to us about how that will be deconstructed?”

The transportation secretary responded saying that “at least 40 percent of the clean investments in this [infrastructure] bill will go to benefit the communities that are overburdened and underserved,” seeming to indicate that the racism was about where roads were being kept up well, versus where they were run down (as best I can positively translate the comment).

“So Part One of that is defining those investments that are eligible, and that’s a lot of it, and we’re working to map out kind of program by program, mode by mode what would qualify. For example, if we’re buying clean buses, how do we make sure where those buses go?” He added, “I’m still surprised that some people were surprised when I pointed to the fact that if a highway was built for the purpose of dividing a White and a Black neighborhood or if an underpass was constructed such that a bus carrying mostly Black and Puerto Rican kids to a beach, or that would have been, in New York was designed too low for it to pass by, that that obviously reflects racism that went into those design choices.”

But does Buttigege really think there is racism, “built-in” the American roadway system? Who knows. The next comments he made were about as confusing as listening to Biden talk off the cuff.

Reporter @AprilDRyan to @PeteButtigieg: “Can you give us the construct of how you will deconstruct the racism that was built into the roadways? … Can you talk to us about how that could be deconstructed?” pic.twitter.com/FXXEq5tuQL

However, as a quick reminder, if you look up the definition of racism you get three options:

The belief that race accounts for differences in human character or ability and that a particular race is superior to others.
Discrimination or prejudice based on race.
The belief that each race has distinct and intrinsic attributes.

It is as yet unclear how pavement rises to the level of any of that. But I guess there’s still a lot we have to learn about how inherently racist things like dirt and concrete are.