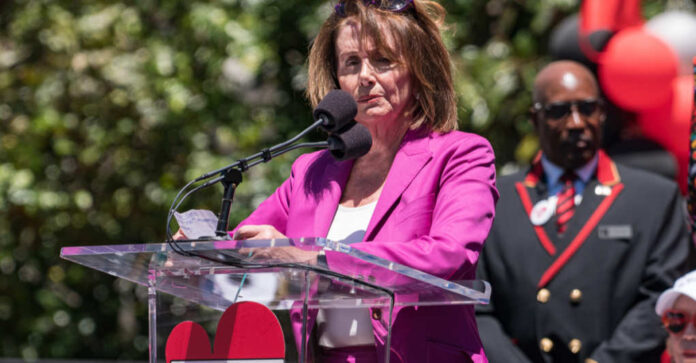 Nancy Pelosi is just a mouth to promote the nastiness of the socialism sweeping through the Democratic Party. For several decades she has had to bite her tongue to remain in power. But now that passionate socialists surround her; she is more willing to pollute the air with her words of insanity.

Most of the things that she speaks are full of lies. The facts never line up, and sources fail to materialize. Lying to the American people never works out well for the person caught telling the proverbial fib. Her lying tongue is part of the poison pool that is damaging the country at its very foundations.

Joe Biden’s Build Back Better nonsense was a ruse that he campaigned with to make people vote for him. And when his vote count fell short, he had it planned out that mysterious ballots would be used to pad his fake fan base with.

The Democrats were able to cram through the $1.75 trillion bills that have been contested for months by several members of each party. The Democrats are fractured over their bills but have duped some Republicans into agreeing with their spending habits.

The “social spending” bill got Nancy Pelosi into a bit of trouble as she tried to pass off apparent lies about it. Her claims were so ridiculous that many people in the House busted out laughing at the very thought of what she claimed about the bill.

She stated, “It will be one of the most significant legislative undertakings that any of us have ever been part of.”

That part may be genuine in her foiled mind since the Democrats have never done much for America. But she would make claims about the bill that would cause many to laugh out loud and cause her to scream at them.

The old gal mustered the lie and stated that “So if you’re talking about how we want to have immediate and enduring difference for the workers and families, creating jobs, securing middle-class tax cuts, lowering costs for families, and making the wealthiest pay their fair share, all the while contributing to reducing the national debt.”

People already pay their fair share of taxes and for her to insinuate that people do not pay enough is typical socialist thinking. And yet, the humorous part of the bill was that she tried to show that spending insane amounts of money would somehow pay down the nation’s debt.

It was at that moment that the laughter started.

People started snickering, which led the old girl to state, “Did I hear a laugh over there? Did I hear a laugh from those who added $2 trillion in tax cuts for the richest people in America, 83% of it going to the top 1%? This is paid for and more than paid for.”

She admitted that the Republicans were the ones that dropped taxes which in turn created growth and helped reduce the amount of money needing to be borrowed to run the country.

RedState reported on the facts of what Pelosi was trying to claim.

They reported that “a new study from the prestigious Wharton School of Business destroyed Biden’s nonsensical claim that Build Back Better would not only cost ‘zero dollars’ to America’s taxpayers but also that ‘zero dollars’ would be added to the national debt as a result of BBB. Pelosi’s claims, then — that BBB will ‘contribute to reducing the national debt,’ and second claim that BBB ‘is paid for and more than paid for’ — constitute a demonstrable bald-faced lie.”

The Wharton School of the University of Pennsylvania will reportedly issue a study Wednesday that reveals President Joe Biden’s reconciliation package will not be free, although the White House has claimed it would cost “zero” dollars. https://t.co/1CB02gFTzd

In typical Democratic fashion, the only thing Nancy Pelosi could do was attack those that were exposing her lies. She had to yell at people laughing at her bald-faced lies. She could not admit that what she was presenting was nothing short of fake news.

Joe Biden can only look like a hero if people lie about him. The nation already sees the hypocrisy of the Democrats, and it is a matter of time before voters kick them out of their beloved offices.