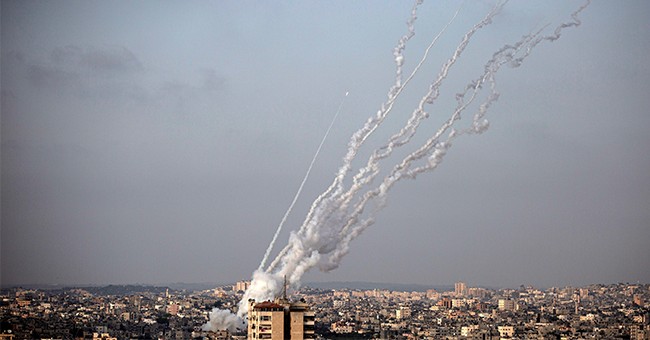 Earlier today came this story from Politico about a huge spike in violence during Monday between Israeli Defense Forces and Palestinian terrorists operating out of the Gaza Strip, requiring the use of the “Iron Dome” by Israel to intercept rockets fired out of Gaza.

Weeks of tensions between Israelis and Palestinians over access to holy sites and the potential eviction of several Palestinian families from east Jerusalem exploded Monday, leaving more than 300 Palestinians hurt, according to media reports. That’s on top of other Palestinians and Israeli security officials hurt in earlier recent clashes.

We covered it here, as well.

Here are some videos that are being posted on Twitter:

Jerusalem Day marks the anniversary of the reuniting of the Old City by Israeli military forces in 1967. Palestinian militants and Hamas had signaled their intentions to increase the level of violence aimed at Israeli civilians, and they were true to its word. From the Jerusalem Post:

The IDF warned Hamas that all options, including a ground operation, were on the table after over 160 rockets were fired towards Jerusalem and southern Israel as thousands of Israelis were parading through downtown to celebrate Jerusalem Day.

Following the rocket fire, the Israel Air Force carried out several strikes in Gaza, killing at least 8 Hamas militants and targeting rocket launchers and two military positions. Palestinian media reported that 20 people had been killed including nine children and another 95 wounded.

Hamas had threatened Israel earlier in the day that it would launch the rockets due to the ongoing clashes in Jerusalem and shortly after 6 p.m. seven rockets were fired towards the capital.

The IDF said that one was intercepted by the Iron Dome missile defense system. Another struck an empty house in a community near Jerusalem. Dozens of rockets were also fired towards Sderot, Ashkelon and neighboring communities as well.

So where is the Biden Administration in this? One of the great achievements of the Trump Presidency was the signing of the Abraham Accords, wherein Israel normalized relations with Arab Middle East countries the United Arab Emirates and Bahrain, and likely paved the way for future deals with Saudi Arabia, Sudan, Oman, and Morocco.

But the violence in Gaza threatens the progress that has been made, especially if the Biden Administration continues to embrace Iran and alienate Israel — a continuation of the policy of the Obama Administration.

Both Hamas and Islamic Jihad took responsibility for the rocket fire saying that it was “in response to [Israeli] crimes and aggression against the holy city and harassment of our people in Sheikh Jarrah and the Al-Aqsa Mosque, and this is a message that the enemy should understand well.”

Palestinian Islamic Jihad leader Ziad Nakhaleh said late on Monday night that “Israel started the aggression against Jerusalem. If this aggression is not stopped – then there is no point in the political efforts to reach a ceasefire.”

These are the groups supported by Iran.

More from Politico on the Biden Administration’s inept handling of the problem:

Some Middle East specialists have been warning the Biden administration since late April that Jerusalem was a tinderbox, that the parade route was a flashpoint, and that the administration needed to speak out about it.

“It was flagged to the State Department that everyone was nervous about the end of Ramadan, Jerusalem Day and the canceled elections, and that a strategy be created to deal with what could be a very violent situation,” one Washington-based think tanker said, requesting anonymity to describe private conversations. “Over the following weeks, we didn’t hear anything from the administration on the Israeli-Palestinian file.”

I guess everyone at the State Department was busy addressing all the diplomatic problems in the world caused by climate change.