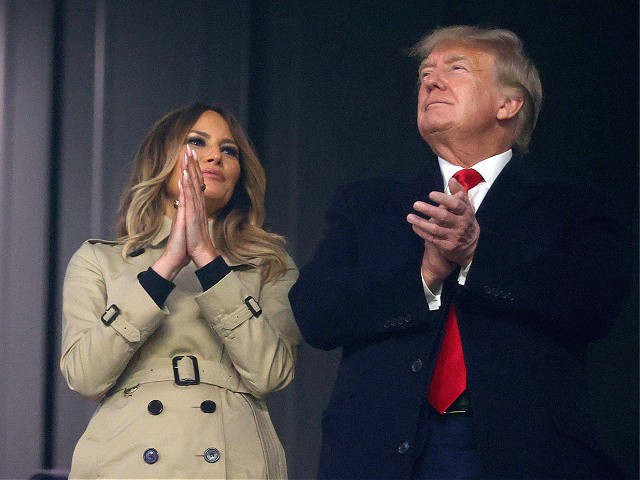 The survey, from pollster Rick Shaftan’s Neighborhood Research and Media, shows Trump at nearly 56 percent with 55.7 percent–leading his next closest possible rival, Florida Gov. Ron DeSantis, by more than 40 percent.

DeSantis, at 12.3 percent, is the only other candidate to break double digits at this stage, per the poll. The third-place candidate is South Dakota Gov. Kristi Noem, at 2.1 percent, and no other candidate gets more than 2 percent–while 20.8 percent are undecided.

Former Vice President Mike Pence and Sen. Tom Cotton (R-AR) each get 1.6 percent in the poll, and former United Nations Ambassador Nikki Haley is stalled out at 1.1 percent. Sen. Ted Cruz (R-TX), who won the Iowa caucuses in 2016, is less than 1 percent, at just 0.8 percent. Sens. Tim Scott (R-SC) and Marco Rubio (R-FL) also get 0.8 percent in the survey. No other potential candidates are named.

Technically, nobody has announced any 2024 GOP presidential campaigns yet, and if Trump runs, a lot of Republicans are expected to defer to him. Noem, for instance, said in a recent Breitbart News exclusive On The Hill video special interview that she would back Trump if he runs in 2024. DeSantis, meanwhile, has reportedly told Trump he would back him but has not said so publicly.

While Trump does have a commanding lead, undoubtedly, he does have work to do to shore up dissent inside the GOP should he decide to run again. A memo from Shaftan accompanying his poll results’ release includes this revelation: “35 percent of respondents did not pick Trump for any of their three choices including 14 percent of very conservative voters, 43 percent of somewhat conservative voters and half of moderates.”

Should he run, Trump also faces what Shaftan describes as a “reverse gender gap,” where men are much more supportive of him than women. Shaftan writes that, in respondents under age 35, “men were much more pro-Trump and women less so”-something he described as a “striking difference.”

“While these numbers on the surface look good for the 45th President, the reverse gender gap is a cause for concern with numbers barely over 50 percent with men, and under when looking at politically influential 35+ men,” Shaftan added.

President Donald Trump stands behind Ron DeSantis, Candidate for Governor of Florida, as he speaks at a rally, Saturday, Nov. 3, 2018, in Pensacola, FL. (AP Photo/Butch Dill)

Shaftan’s survey offered respondents second and third choices as well, and it is there where DeSantis cleans up. “DeSantis’s strength with 35+ men who make up a large share of the political class is not only a long-term concern for Trump, but his strength, especially among Trump voters on the second ballot, sucks all the oxygen away from any other potential candidate,” Shaftan wrote. “DeSantis gets support on one of the three ballots from 39 percent of voters. Kristi Noem is next at only 5 percent.”

As such, Shaftan wrote, DeSantis, for now, can wait on the sidelines and see what happens before he makes any decisions.

“Should Trump choose not to run, DeSantis becomes the immediate frontrunner and Republicans across America will be tripping over each other to endorse him first,” Shaftan wrote. “DeSantis knows this and that gives him the ability to hang back and play it cool.”

That is an interesting analysis as former New Jersey Gov. Chris Christie-now a Trump critic still bitter over not being selected as Trump’s running mate in 2016, who is likely to try another run for the White House in 2024-has already begun attacking potential rivals in a Trump-less field, saying they should not be waiting for the former president before deciding if they will run themselves next cycle.

“Those people who say that they will defer to Donald Trump have disqualified themselves from being president,” Christie told Axios in a recent interview. “Because if you’re not willing to stand up to someone … how can you … be standing up for everyone when you’re president?”

Shaftan’s Iowa GOP caucus survey comes on the heels of a Des Moines Register general election poll in Iowa that shows Trump also dominant over Democrat President Joe Biden in a potential 2024 rematch. Trump won Iowa in both the 2016 and 2020 general elections, against Democrat Hillary Rodham Clinton and Biden respectively.