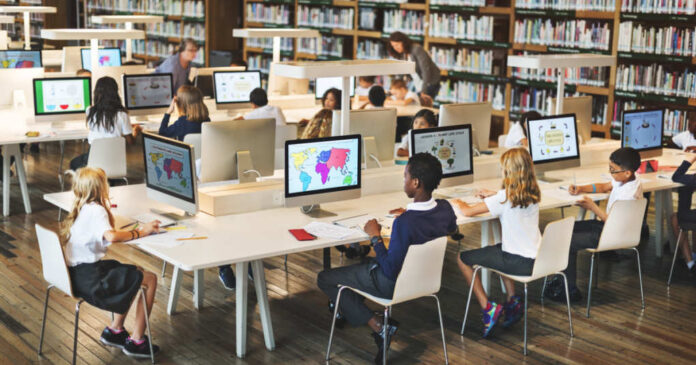 Parents are targets of the liberal left because they expose the horrors the Democrats are putting kids through. The liberals want to flood kids with pornographic material, and descriptive words that are best left to the triple X rated shops found in dark places. And when they are finally exposed by loving parents, the liberals want to engage in all-out warfare to try and criminalize the opposition.

Joe Biden has even tried to get the FBI to be the one force used to investigate any household that speaks out against a school’s methods or content. He is trying to set up his private regime to wander the nation looking for those he can drag off into Biden land to make an example out of them, so others do not protest the liberalism flooding the school systems.

Stacy Langton is one such parent targeted by the liberals for standing up for the integrity of young minds. She is the one that found pornographic material in the Fairfax High School library and then sounded the alarm.

Langton is a fighter for what is proper and ethical when it comes to young minds. She was not about to sit back and let the school district get away with such perversion.

The Daily Wire reported that the Washington Examiner shared the story of how Stacy Langton is now barred from entering the school’s library to check up on the material being offered to students. She was told to keep her nose out of school business.

The Washington Examiner noted that the Langton had been in the school library before and was never told that there was an anti-parent policy that kept her from entering. The policy was made-up after she called attention to the material placed there by lying liberals.

Maureen Keck is the principal that confronted Stacy Langton and kicked her out of school property. Washington Examiner reported that “In response to Langton’s request to see the policy, Keck sent her a school policy that was reviewed by the Washington Examiner and makes no mention of restricting parent access to the library. The policy makes no mention of restricting visitor access to parts of campus anywhere, provided all visitors sign in at the front entrance and obtain a visitor pass. Langton said that while she signed in, the machine that provides visitor passes was out of order and had been for weeks.”

The principal was upset that Langton found the material and brought it to the public’s attention. The liberals tried to pull another fast one and got caught holding a bag of deception and lies. Langton took the material from the library and read it out loud during a school board meeting. The educators were so enraged that they just had to expel the parent from the library.

Keck lied to Langton when she mentioned the school policy. Such terminology is often used to keep people from pushing an issue, and it is also a coverup for organizations to keep from having to answer for mistakes they have made. The fact that they will not let her back into the library only shows that there are other items in stock that they do not want their parents to find.

Langton requested that Keck give her a copy of the policy that demanded parents stay out of the library. Their refusal to let her in is a massive coverup.

The Democrats operate in the dark. The only time their deceptive deeds are ever discovered is when people keep an eye on them. They always react with violence and will seek to discredit or harm the opposition. Langton is an example of the type of involvement that parents need to have to keep the liberals from terrorizing kids.