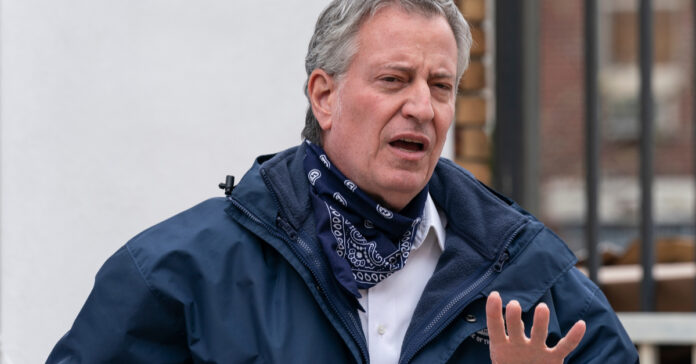 The Democrats all over America are salivating the money extravaganza that they are going to get from Biden’s infrastructure bill. Many have already dreamt of the ways they can push woke philosophy while at the same time spending money that has yet to be printed. But of all the excitement and false hopes they are living through, nothing takes the cake more than watching Bill de Blasio, the mayor of New York, bribe kids to get vaccinated.

The selfish mayor is taking to the streets and bribing kids with $100 bills if they would be willing to step in line and get a shot in the arm. He is using the holidays to get kids ages 5 to 11 to get a shot in the arm at their school or a clinic run by the city. They cannot go to their doctor; it has to be at his location.

There was not one mention of having the parents take the child. De Blasio spoke directly to the young kids and offered them $100 to sneak into a line and get a shot.

The Democrats do not believe that parents should have the right to tell their kids what to do with their health. They feel that it should be left up to the federal government to dictate what the young person should do.

BREAKING NEW$: Kids ages 5-11 are eligible to get the $100 vaccine incentive when they get the #COVID19 vaccine at a City-run site!

The kids are also being bribed with tickets to special events. De Blasio mentions the family when it comes to keeping them safe. But he does not mention that parents have the right to decide what is best for their kids.

The mayor stated that “We really want kids to take advantage, families to take advantage of that. Everyone can use a little more money around the holidays, but more importantly, we want our kids and families to be safe.” But to get the money, the kids have to do it at a location dictated by the socialist mayor.

The silence of the bribe is what is concerning to many people. No one is claiming that mask can come off if people get the shot. It is not like a Democrat to give up one demand to achieve a goal. They want power and will not let people breathe fresh air just because they complied once.

All of de Blasio’s minions are out in public pushing the idea, and Dr. Jay Varma is one of those minions. She stated, “The reality is we all want, as public health professionals, to also go back to the day that we and our children don’t have to wear masks and feel the way they did before the pandemic.”

The reality is not the same, and people do not want to give up their right to choose. Even Dr. Dave Chokshi, who is Biden’s Health Department Commissioner, has pushed the notion that the kids are the infection of society. He went on to praise the bribe as a means to keep kids safe. The virus never hit the kids, and it will never be the nasty bug they think will work with the younger generation.

The vaccine is now being offered to grade school children. For some reason, the need to force the juice into the kids is high with the liberals. There has been zero data released as to the effects the shot will have on the younger generation. People want to believe that it is safe, but with all the horrible effects on the adult population, there is a lot of skepticism of whether it is the right time for kids or not.

The pushy Democrats are willing to sacrifice the health and safety of the younger generation to strip freedom away. The nasty mayor is resorting to bribery to get their kids to beg their parents to take them to a city clinic for the shot. And for that reason alone, the offer needs to be boycotted and the mayor arrested for trying to bribe a minor.