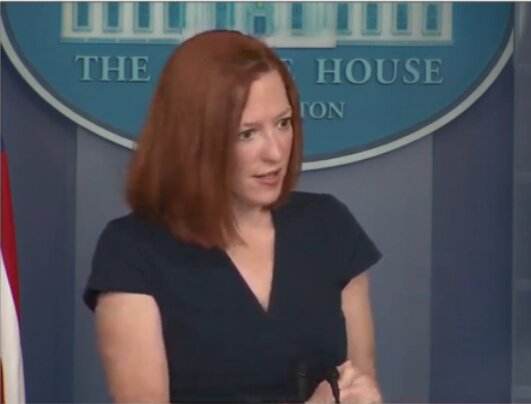 Sarcastic, bitter, and vague are all terms that come to mind when looking at the Biden administration’s press secretary.

The press secretary is supposed to interact with the media – and share details of what the administration is doing about hot topics that concern Americans.

To say that Jen Psaki is not good at her job is an understatement.

She is unable to answer most questions from the media. This means that she hasn’t bothered to research what’s going on or she’s just as ignorant about the issues as President Biden himself is.

She talks about “circling back” to important issues only to never actually provide pertinent information. And, when backed into a corner about providing an answer, she relies heavily on sarcasm.

During a podcast interview with David Axelrod, her former boss who was also Obama’s campaign manager, she talked candidly about leaving her position.

With everyone giving different stories, it seems that this is the M.O of the Biden administration.

And Psaki is the ringleader.

Psaki doesn’t have the background to be a good press secretary, though – and it’s questionable as to what her recent experience offers. She was a press aide for the Obama campaign. Then, during the Obama administration, she was a spokesperson at the State Department.

What did she do during the four years of the Trump administration, though? Maybe she’ll circle back to that.

Psaki said that she agreed to take the job of press secretary for roughly a year.

During the podcast interview, Axelrod acknowledges that she was a “dark horse” candidate for the press secretary position for Obama – though it ultimately went to former TIME journalist Jay Carney.

Former journalists are the ones who should be press secretaries. They have the experience of being on the other end so they know what information to provide.

Psaki recalled being grateful that she wasn’t chosen over Carney because “I would not have been ready at that moment.”

Should someone tell her that she’s still not ready?

She was a runner-up to replace Carney again in 2014. Her continuously being passed up for the position during the Obama administration should have been a sign that she didn’t have what it takes to be press secretary.

Axelrod also pointed out the “Oh $hit” moments that Psaki admits to having “almost every day.” This is when she realizes that she should have done better on her talking points.

She’s been on the job for over 100 days now – and she continues to have way too many “Oh $hit” moments. This would include her sarcastic dismissal of a Space Force question as a “plane question.”

If she expects anyone to mourn her when she leaves the position, she will be sadly mistaken. Liberal and conservative members of the media alike will be celebrating her last day so that they can finally get more insight into what’s happening with the Biden administration.

More, they can finally get answers without having to weave through the sarcasm that Psaki has become famous for.