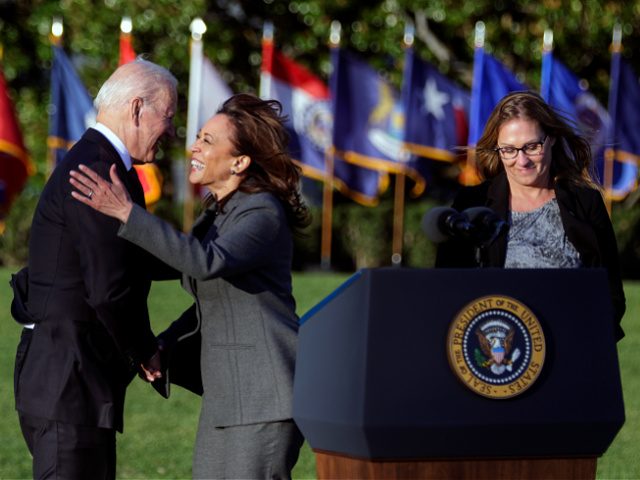 The comical moment occurred outside the White House during the infrastructure signing ceremony where Heather Kurtenbach was invited to introduce President Joe Biden after a string of various lawmakers touted the infrastructure bill.

“In a moment,” Harris said.

Kurtenbach (Harris) introduced President Biden, an atypical move that came one day after CNN issued a lengthy report about tensions emerging between the Harris and Biden teams.

Now that all of America knows her name thanks to an unexpected gaffe, it is fair to ask: Who exactly is Heather Kurtenbach?

U.S. President Joe Biden reacts as Heather Kurtenbach, Organiser and Political Director of Iron Worker local 86, speaks during a signing ceremony for H.R. 3684, the Infrastructure Investment and Jobs Act on the South Lawn of the White House in Washington, DC, on November 15, 2021. (Photo by MANDEL NGAN / AFP) (Photo by MANDEL NGAN/AFP via Getty Images)

According to Construction Business Owner, Kurtenbach has been part of Iron Workers Local 86 for over 15 years, having joined in 2005 after being released from prison when her brother-in-law encouraged her to put in an application.

“I came to the Iron Workers Local 86 in 2005. I had recently been released from incarceration. I couldn’t find a job anywhere. No one would hire me,” she told the publication.

“I gave it everything I had on evaluation day. And since then, every day I go out; I work hard; I show up on time,” she added.

Throughout her tenure, Kurtenbach has slowly climbed the ladder from foreman to general foreman, eventually becoming an apprenticeship instructor. In 2019, she became the first female business agent for the Iron Workers union. Her experience of moving up through the ranks from nothing has only motivated her to help other women coming out of incarceration. Through her program Trades Related Apprentice Coaching (TRAC), Kurtenbach has formed a “partnership between the prison system in Washington and unions representing the construction trades (the Carpenters, Iron Workers, Laborers and Cement Masons unions).”

“The Iron Workers union has language written into its standards that allows Kurtenbach and her colleagues the opportunity to help the TRAC candidates by providing them with boots, helping with union initiation fees, etc., through several 501(c)(3) charities,” noted the outlet.

On top of her work with legislators to pass labor-friendly laws, Kurtenbach hopes to make the construction industry more inclusive for women, believing that it should adjust to provide them with better PPE.

“Women need better PPE. A lot of times when we go to buy a pair of work boots, they don’t even have our size. Contractors are just now starting to come around with smaller, better-fitting PPE for female workers,” she said. “It would do wonders for retaining talent.”

“I also want to see women standing together more and sticking up for each other. Because we are so few, tradeswomen tend to be standoffish. We need to support each other more,” she added.

During her speech at the White House on Monday, Kurtenbach praised President Joe Biden for believing in women like her.

“That’s what’s great about America,” she exclaimed. “And having a president who believes someone like me should be standing here.”

“On behalf of Local 86 in Seattle and union workers everywhere, I am honored to introduce the 46th President of the United States, Joe Biden,” she concluded.