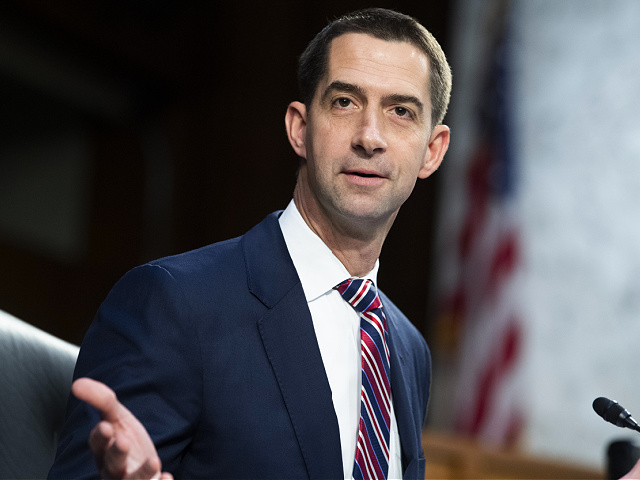 While fundraising and campaigning for GOP candidates ahead of the 2022 midterms in Iowa last week, Cotton told Breitbart News that if the Democrats bring the Biden agenda bill up for a U.S. Senate vote, then the Republicans in the Senate have the ability to force what is called a “vote-a-rama” where they can force as many amendment votes as they want. Cotton previewed some planned amendments to make life difficult for Democrats, in which he and other Republicans will push measures designed to target President Joe Biden’s and the Justice Department’s decision to give out $450,000 settlement checks to illegal aliens separated at the border from their families due to former President Donald Trump’s strict immigration enforcement measures.

“I will say this, that if the Democrats move forward with this massive spending bill, we will have an opportunity to offer a lot of amendments to that bill and I look forward to some of the vulnerable Democratic senators up for election next year taking a vote on this very question,” Cotton said. “I can assure you they will be forced to.”

“We can have as many amendments as we want for as long as we want, and let’s just say we have a lot to get off our chests,” Cotton added. “If they move forward with this reckless spending plan, there is no doubt we will force them to vote on amendments that, for example, would block these kinds of collusive lawsuit settlements for illegal migrants.”

This threat from Cotton comes after Biden signed his “Bipartisan Infrastructure Framework” (BIF) into law on Monday at a ceremony at the White House. That plan was pitched to the public as “infrastructure,” but in reality, it contains very little real “infrastructure” dollars and much more radical leftist spending priorities as Breitbart News has reported.

While some establishment Republicans did vote for the first element of the Biden “infrastructure” agenda in both the U.S. Senate and U.S. House — the bill Biden signed into law Monday — no Republicans are expected to back this second plan, and Democrats will need to hold their entire conference together to get it through the Senate. In the House, Democrats can only afford to lose a handful of votes given the slim majority House Speaker Nancy Pelosi enjoys.

The White House says the second plan costs just $1.75 trillion — several trillion less than the original $3.5 trillion goal — but there are concerns, even among some Democrats, that the Biden administration and congressional Democrat leaders are using gimmicks to make it seem like it costs less. Some independent analyses have shown the plan costs more than $4 trillion if all the programs in it are funded indefinitely, and the nonpartisan Congressional Budget Office (CBO) is expected to release a formal estimate by the end of the week.

To get hard-left progressive Democrats to drop their opposition to passing BIF without already passing BBB — they viewed the BIF as a bargaining chip to force self-proclaimed “moderates” in their conference to back the even more radical broader agenda — Pelosi promised House action on BBB by this week. However, a statement several of those “moderates” released says their support hinges on CBO’s analysis of the bill matching the White House — an unlikely outcome given the economic chicanery Democrats employed to get the top line number lower — and the looming formal estimate could derail action even further, pushing negotiations past Thanksgiving into December.

If and when a bill passes the U.S. House, it would then need to go through the U.S. Senate as well before Biden could sign it into law — and because of the use of a budget gimmick trick known as “reconciliation,” Democrats can technically pass the bill through the Senate along partisan lines with just 50 votes avoiding a GOP filibuster. In the event of a 50-50 tie, Vice President Kamala Harris could cast the tie-breaking vote. But to get there, the White House and congressional Democrat leaders need to hold their entire caucus together and cannot afford any defectors. That’s why what Cotton is talking about here is so important: the more painful the process, the more likely a defector emerges — and the longer this takes, especially if it is not done by the end of the calendar year, the less likely a bill ever passes at all.

Imagine Sens. Maggie Hassan (D-NH), Cathy Cortez-Masto (D-NV), Raphael Warnock (D-GA), Mark Kelly (D-AZ), and Michael Bennet (D-CO) — among others — being forced to choose between handing out taxpayer-funded payments to illegal aliens or to families of American military members killed in the line of duty. Or those same Democrats being forced to make other tough choices. Maybe they will choose to sell out their constituents to foreign lawbreakers for a radical agenda, maybe they will not, but either way, the campaign ads write themselves.

Cotton said that in battleground Iowa — where recent polling has shown Trump trouncing Biden in a hypothetical rematch, and a vulnerable Democrat Rep. Cindy Axne (D-IA) walks the plank toward 2022, and Republicans aim to retain two other competitive House seats and a U.S. Senate seat — he constantly hears about the $450,000 payments Biden’s Justice Department is handing out to illegal aliens.

“One thing I just heard at this lunch, for instance, was people repeatedly bringing up Joe Biden’s insane proposal to give $450,000 checks to illegal migrants,” Cotton told Breitbart News on Friday afternoon. “Because of Trump-era policies, we only give $100,000 to soldiers who are killed in the line of duty. There is just astonishment that our border is still totally wide open. Honestly, it’s only going to get more wide open if we give these kinds of payments to illegal migrants.”

When Biden was first asked about the payments, he denied it was happening — but then later he found out that the Justice Department was in fact making them at the urging of leftist organizations like the American Civil Liberties Union (ACLU).

“It was funny to watch Joe Biden’s evolution, if you will, on this question,” Cotton said. “I’ve been saying this about him. He’s been around politics for 50 years or so, so when he was asked at a press conference about these payments to illegal migrants, he could immediately sense it. This is radioactively unpopular, ‘I should deny that it’s happening.’ And then he walked out of that press conference, and I think his staff had said, ‘actually, sir, this is happening.’ … There’s no doubt that it’s the result of collective lawsuits by the ACLU against all their probably fellow former co-workers that they still run the Department of Justice, that are going to give away millions and millions of tax dollars to people who have no right to be here in the first place. Isn’t it funny that they can’t find the illegals to deport them, but they can find them to give them half-million-dollar checks?”