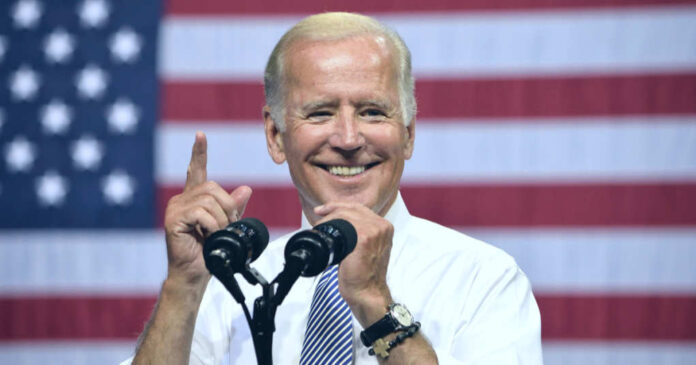 Of all the things to be proud of Biden has hitched his wagon to some interesting ones. A cocaine-addicted, and ‘miraculously’ not dishonorably discharged son in Hunter; numerous failed racist policies he now opposes; and to top it all off, now he’s so proud of his inflation?

Speaking at the Port of Baltimore, Biden was beaming with pride at what he has done and seems to revel in the attention from this inflation. “Did you ever think you’d be paying this much for a gallon of gas? In some parts of California, they’re paying $4.50 a gallon… Everything from a gallon of gas to a loaf of bread costs more…People are feeling it. They’re feeling it.” God with that last sound bite alone I think he’s ready to start spinning records in Las Vegas at some casino pool.

This tone of pride in an issue that is crippling many Americans financially is disgusting, to say the least. It’s almost as if Biden is living in backward land or some other equally unrealistic place. Yet here we are with him beaming with pride over destroying the American economy and the dreams of many of the American people. Despite this, Biden showed small and minor touches with reality (I know, it’s weird to say ‘Biden’, ‘minor’, and ‘touching’ in the same sentence without it being about his pedophilia ways).

“It’s worrisome even though wages are going up… Thanks to the steps we’re taking, very soon we’re going to see the supply chain start catching up with demand,” he said. “So not only will we see more record-breaking job growth, we’ll see lower prices, faster deliveries as well”. These small bits of sound bites give a small hope that maybe he can get fully emerged back into reality and get things going in the right direction.

One thing is for certain; the more time he spends in la-la land, the more the people fail to trust him or anything he says. His delusions of grandeur and success are incredibly troublesome as the more he believes them and preaches them, the more empowered the left becomes by them. As if a failed economy is a sign that he was what we needed all along, or maybe they’ll blame Trump since so many think the President’s efforts aren’t seen till 4 years after they leave office. Either way, this is a problem.

As hi good buddy Pete Buttigieg is still on the sidelines and doing little to nothing for our infrastructure, we are finding ourselves slipping further and further away from being the success story we once were. Prices go up, wages stay the same or go down, and the dollar comes up even shorter than the day before. This is the reality we are finding ourselves in, and no matter how proud Biden is of it, this is not good. The longer the tailspin continues to spiral, the worse we become as a nation.

So what can we do to pull him back into reality? Perhaps it’s time for him to have a sit down with some real Americans. No TV cameras to pander to, no politicians to score points with, no agendas to push. He would need to listen to their stories and help figure out answers to the problems. Since this is a problem with his economy, perhaps he can explain how the American people could do more to ‘feel it’, since most of us are hating it.