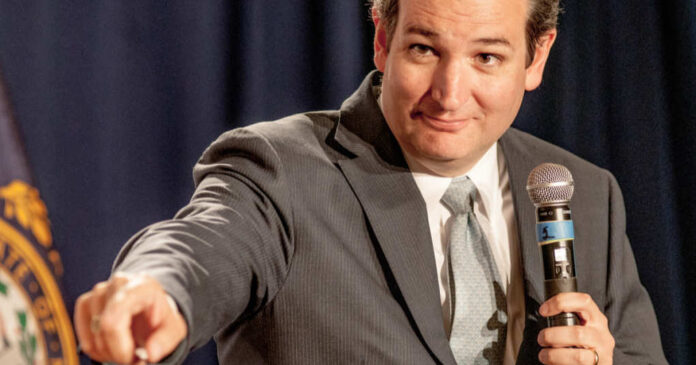 Republican Senator Ted Cruz from Texas appeared on “Sunday Morning Futures” with host Maria Bartiromo. Cruz used the platform to criticize Republicans in the House and Senate who voted for President Biden’s infrastructure package. The senator said that his colleagues “breathed life into” the “failing” Democratic agenda.

Senator Cruz maintained that the Republicans had an opportunity to stop the whole agenda, but a number of his colleagues chose not to go down that path.

Bartiromo noted that there were 19 Republicans in the Senate who voted for the infrastructure package and there were 13 in the House who voted in the same way.  “What exactly did that do? Now, because they did that, the path is wide open for much higher taxes for the rest of us to pay. Isn’t that true,” Bartiromo asked.

Cruz also added that Republicans spent a number of lunches “yelling at each other” about the legislation. He said that some of the GOP who voted for it were allegedly under the belief that if the infrastructure package passed, the Democrats’ social spending bill would be “less likely to pass.”

The Texas senator clearly stated that, especially for House Republicans, they had President Biden and his Democratic Party’s agenda “on the rails.” The party agenda was failing. Cruz said, “It was on the way to going down. And what those Republicans did is they breathed life into it; they gave Joe Biden a political win. He’ll now go across the country touting, look at this big bipartisan win. And that additional momentum, unfortunately, makes it more likely that they whip their Democrats into shape and pass some multi-trillion-dollar spending bill on top of this that will include, unfortunately, trillions in new taxes.”

He stated that this is what the stakes are all about and he hoped it didn’t happen.

Cruz went on to suggest that he also hoped Joe Manchin from West Virginia would do what he has suggested. Manchin, who is a moderate Democrat, believes that before they even talk about the next package, they should wait until inflation is dealt with and stopped. Cruz hopes that they will do this and wait until sometime next year. He said that would show a lot of wisdom and that if Manchin were to spearhead a move like that, it would be a “very statesman-like act.”

Senator Cruz also recently had some words for Representative Liz Cheney (R., Wyo.). He said that if she really does launch a bid for the presidency in 2024, she should do it as a Democrat.

This comment from Cruz came as a response to a tweet by CNN’s The Lead. The network featured a video of a panel discussing the possibility of Cheney running in the next presidential campaign cycle. The CNN tweet asked, “Is there a lane for Liz Cheney in New Hampshire in 2024?”

This prompted Cheney to tweet back, “I know you’re posturing for the secessionist vote, Ted. But my party, the Republican party, saved the Union. You swore an oath to the Constitution. Act like it.”

Cheney’s tweet is connected to a comment Cruz allegedly made last month regarding the potential for Texas to secede from the Union if the Democrats “fundamentally destroy the country.”

Cheney was one of ten House Republicans who voted to impeach Trump in January for “inciting an insurrection.”

And in May, House Republicans voted Cheney out of her role as chairman of the House Republican Conference. She had repeatedly criticized former President Trump’s claim that the 2020 election was stolen.