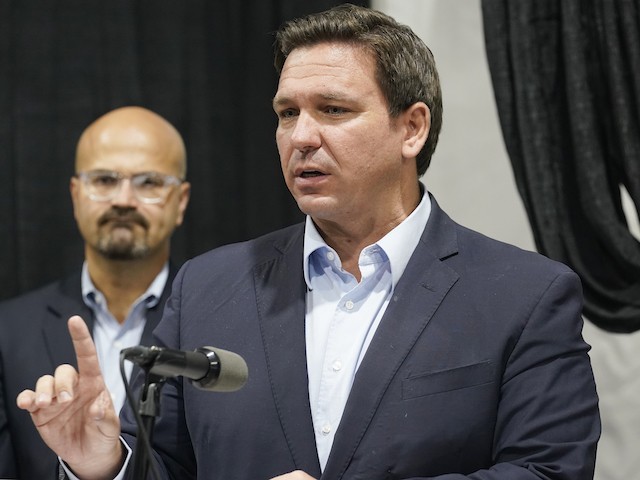 Speaking at a dinner hosted by the National Federation of Independent Business’ Florida chapter this week, the Florida governor said, “If it gets to the point where they are trying to enforce, my view would be ‘don’t comply’ and we would support the Legislature taking some of the stimulus money and using it to pay off the fines that business incur.”

According to Politico’s Florida Playbook:

A defense fund– This is the second time DeSantis has floated the idea of having Florida taxpayers offset any fines (a “defense fund,” he called it previously) placed on businesses, if they do not comply with the rule put in place by the federal agency that oversees workplace safety rules. The governor noted the law is on hold due to an appeals court ruling and he predicted that “ultimately, it’s going down.”

Ripple effects — There could be a lot of ramifications to this nonetheless — such as if the federal government demanded the money be paid back because it wasn’t used correctly. But more importantly, there’s a much bigger issue looming around a Biden administration proposal that requires health care providers to adopt a vaccine mandates. If they don’t comply, those providers could lose tens of millions in federal health care dollars. Several states have already sued over this rule but Florida hasn’t yet. When asked about it on his way out of the door DeSantis said “stay tuned.”

That would not be the first time the Florida governor has predicted the downfall of Biden’s Occupational Safety and Health Administration (OSHA) rule, which would require employers with over 100 employees to implement vaccine mandates or testing requirements. The cost of the latter would be placed on the unvaccinated worker, amounting to a “work tax”, as Breitbart News reported at the time of the rule’s release this month.

In this Sept. 14, 2021, file photo, a syringe is prepared with the Pfizer COVID-19 vaccine at a clinic at the Reading Area Community College in Reading, Pa. Companies with at least 100 workers will be required to give employees paid time off to get vaccinated against COVID-19 and paid sick leave if they have side effects from the shots. That’s according to a Biden administration official who spoke Monday, Nov. 1, about pending vaccine-mandate rules from OSHA, the Occupational Safety and Health Administration. (AP Photo/Matt Rourke, File)

“The federal government can’t just unilaterally impose medical policy under the guise of workplace regulation. And that is exactly what they’re trying to do here,” DeSantis said following the rule’s release, explaining it as an “attempt to shoehorn policy through the bureaucracy in a way that will be difficult for some of these individuals and private parties to resist.”

“I think it’s interesting that this is being done under the guise of emergency power,” he added, noting it took officials two months to craft the rule, fundamentally undermining the narrative that it is, in fact, an emergency.

DeSantis added that the OSHA rule, which he believes will be defeated, is just the “tip of the iceberg.”

“There’s going to be more power brought to bear, going forward if we don’t stand up now, and fight back,” he warned. “I just think people are so sick of constantly being bossed around restricted, mandated all these different things.”