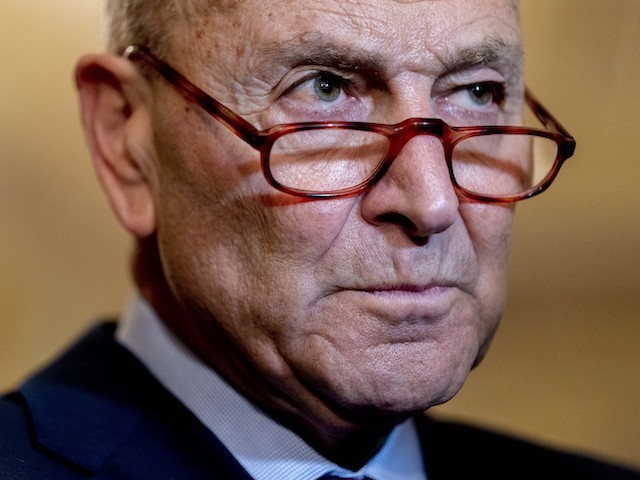 The explosive memo obtained exclusively by Breitbart News and currently circulating among House conservatives exposes that Schumer’s plan would spend millions of taxpayer dollars forcing the National Science Foundation to hire a “Chief Diversity Officer” and spend $5 million on things like “establishing a strategic plan for diverse participation” in Science, Technology, Engineering, and Mathematics (STEM) fields. Schumer’s plan would also force the National Science Corps to establish a pilot program for things like “advancing equity.”

“The China bill filled with CRT is like cocaine laced with fentanyl,” a senior House Republican aide told Breitbart News. “Together, they’re a deadly combination. Now, Schumer is trying to inject this mix into our annual defense bill and poison us all.”

“No one serious about confronting China would write a bill laced with CRT,” the senior aide added.

These revelations come in the wake of the Virginia governor’s race, where Governor-elect Glenn Youngkin — a Republican — defeated Democrat former Gov. Terry McAuliffe in large part by zoning in on Critical Race Theory. Since the political potency of this issue has been demonstrated there, conservatives have made a renewed effort to expose CRT in Democrat-backed plans, and these talking points circulating among top House conservatives aides say are likely to start appearing in public comments by conservative House and Senate members working to stop Schumer’s plot.

The background of this fight is that the Democrat-controlled U.S. House has already passed its version of the NDAA — which does not contain these provisions. The Senate, at Schumer’s direction, has stalled on taking up the must-pass defense authorization plan, leading even Democrat House Armed Services Committee chairman Rep. Adam Smith (D-CA) to raise concerns with Schumer over it. Reports last week surfaced about Smith trying to reach Schumer to press him on when the Senate would be considering the NDAA and Schumer avoiding his phone calls.

Meanwhile, the Senate has already passed a bill called the United States Innovation and Competition Act (USICA)–previously named the Endless Frontier Act. The bill purports to counter Chinese aggression in academia, research, business, and technological advancement fields–but in reality, just spends a whole bunch of money on special interests Democrats have. Some Republicans like Sen. Todd Young (R-IN) joined Schumer in pushing the bill through the Senate earlier this year over the objections of people like Sen. Marco Rubio (R-FL) in the Senate and Republican Study Committee committee chairman Rep. Jim Banks (R-IN) in the House.

After the Senate passed USICA, it languished and has not gone anywhere in the House. Schumer has now decided to announce in a letter this week that the Senate will take up the NDAA now and may add USICA into it–a massive alteration to the House-passed defense bill–as an amendment.

Smith, the Democrat defense bill lead in the House, has since come out and said he is “wide open” to possibly including the USICA in the NDAA. However, Smith — again, a Democrat — says that House Democrats have real concerns with parts of Schumer’s proposal.

“There’s a lot of people in the House who have different concerns with different pieces of USICA,” Smith said, per Bloomberg, adding, “We’ve got to get to good on that in order to figure out what we can include.”

Now, some conservatives on Capitol Hill are sounding the alarm about the proposal, uncovering new never-before-reported-on provisions, including a wide-scale implementation of Critical Race Theory throughout Schumer’s bill.

Previous GOP criticisms of the USICA focused squarely on Schumer’s bill’s lack of safeguards to prevent the very research the U.S. would be funding under it from falling into the hands of the CCP, as has been the case with many U.S. academic and other technological advancements in recent years. Rubio, for instance, back in the spring in an exclusive On The Hill long-form video interview with Breitbart News, bashed Schumer’s plan as “crazy” to not have those in place.

“But imagine if you’re trying to say, ‘ok, so America is now going to spend $150 billion on research through universities that we already have our claws in. That’s great. We’ll just steal it. Go ahead and spend your money, and we’ll steal your research. We get it for free,'” Rubio said then. “It’s crazy. It’s nuts. So that’s the problem we’re having, these things of that nature. And the reason it’s happening is because universities have ins with the administration, and they’re saying, ‘hey, don’t put in a lot of restrictions or safeguards because it’s going to slow down our research.’ Well, that’s crazy. It would be faster for me to get on an airplane if I didn’t have to go through TSA too, but we have to do it. We have to have safeguards. So what’s that they sense.”

Banks, back in October of this year, the last time the Democrats tried to revive Schumer’s bill, called the lack of safeguards against China stealing U.S. research funded in the USICA plan “insanely weak” and “feckless.”

But now, this conservative memo that Republican offices in the House and Senate are circulating includes several new lines of attack from the right against Schumer’s plan. In addition to the “Chief Diversity Officer” at the National Science Foundation (NSF) and funding for “advancing equity” in the National Science Corps, the memo exposes Schumer’s plan’s push to force the NSF “to collect and report demographic information like gender and race for patent inventors.”

In section 6112 of the bill, per the memo, it also requires states to implement woke CRT leftist programs to even get some of the money.

“In order for states to be eligible for some grants, the state will have to enact a plan to address ‘inequity’ by giving subgrants to close ‘equity gaps’ and boost enrollment in computer science education coursework for students facing ‘systemic barriers,'” the memo says.

What’s perhaps most astonishing about these revelations about CRT being laced throughout the plan is that a group of Republican senators helped Schumer get this across the finish line. Indiana’s Young, for instance, was not the only GOP senator to push the bill through and support it on final passage. Senate Minority Leader Mitch McConnell (R-KY) led the establishment GOP cave to the bill laced with Critical Race Theory back in the summer, despite warnings from several Republicans like Rubio and Banks that the bill was bad. Now, it is becoming even clearer just how much worse the bill was than anyone expected–putting those Republicans who backed the CRT-packed Schumer plan on blast for even worse votes than were realized at the time.

All Democrats voted for it, too, except one notable exception: Sen. Bernie Sanders (I-VT), an independent who caucuses with Democrats. Sanders had raised concerns with a provision in the legislation, first exposed by Breitbart News, that would give a carveout for a moon landing contract to Amazon founder Jeff Bezos, whose space company Blue Origin lost out on a separate contract to Elon Musk’s SpaceX. The bill, thanks to an amendment included during committee markup from Washington Sen. Patty Murray (D-WA), whose state includes Amazon’s and Blue Origin’s world headquarters, would create a second multibillion-dollar contract that would presumably pay off Bezos’s company for losing in the first bid to Musk.

In addition to the new CRT provisions exposed in this conservative memo, the memo also details several other wasteful provisions in the USICA that would presumably get shoveled into the NDAA if Schumer succeeds in combining his pet project into the national defense bill.

“Wasteful spending” highlighted in the memo includes these bullet points, as quoted directly from the memo:

It remains to be seen what happens next, but with action coming on the so-called “Build Back Better” bill carrying most of President Joe Biden’s agenda, as well as looming government shutdown and debt ceiling deadlines, Schumer playing hardball with the NDAA–another must-pass bill–could seriously complicate matters for Democrats in the winter and make for a long holiday season on Capitol Hill.