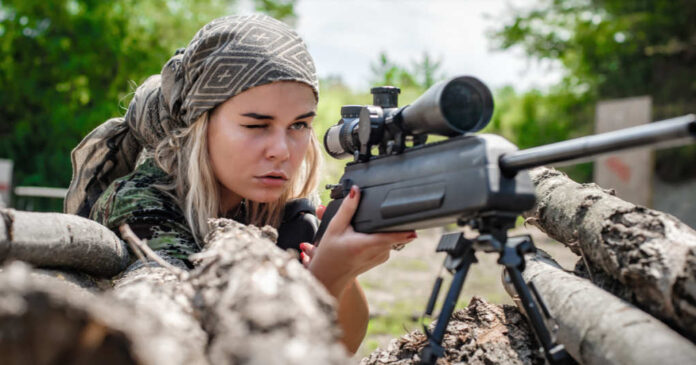 It takes a lot to become a sniper for the Army. It’s not only a significant amount of training. It’s also skill. And up until this point, it’s been a male-dominated position.

Well, as the old saying goes, “anything you can do, I can do better.” And one woman decided to put it to the ultimate test by graduating from the U.S. Army Sniper Course at Fort Benning, Georgia. The soldier’s name won’t be released due to it being classified. However, she was formerly a Montana Guard soldier.

She first joined the Guard in December 2020. It didn’t take long before she had earned herself a spot at the elite sniper school. The release said that she had shown “superior performance” in marksmanship.

Captain Joshua O’Neill said that “we’re all incredibly proud of her. She epitomizes what it means to be an infantry Soldier and there was no doubt in our minds that she would succeed” in the course.

Many liberals often complain that there’s racism or sexism within the elite positions of the military. However, that’s not the case. The way that the military stays strong is by making sure that everyone is equal. Women have to prove themselves just as much as men. Otherwise, it can compromise a mission.

Spots as a sniper aren’t simply handed out. In the Army, there are no participation medals. If you want a particular position, you have to earn it. And that’s what this female soldier did during her time at Fort Benning.

The seven-week course began in September, shortly after she completed her infantry training. Captain David Wright, the commander of the sniper school explained, “the Soldier met every standard required to graduate the United States Army Sniper Course.”

Read that again. Every standard was met. That means that nothing was handed to the soldier. She completed the training and met the requirements that are required to be a sniper, regardless of gender. It ensured that the Army wasn’t going to take shortcuts, despite what the liberals in the federal government would have them do.

The female soldier will be heading back to her unit in Montana. However, now, she carries the title of being a qualified Sniper. Many have congratulated the soldier because she is the first female in the history of the Army to have met the necessary qualifications. And, her accomplishments will likely pave the way for many more females to complete the training in the Army…and other branches of the military.

“We are extremely proud of this Soldier’s achievement and recognize that this is a milestone for not only Montana, but the entire National Guard and Army,” boasts Major General J. Peter Hronek, the Adjutant General for Montana.

In the past few years, women have acquired a number of exciting accomplishments. Some of this has to do with the military opening up more opportunities for women. The military stopped being a boys club years ago. However, there were still many positions that were traditionally maintained for men.

More and more women have joined the ranks of armor, infantry, and engineer formations since 2016. According to Military Times, the National Guard has played a significant role in helping with the gender integration process. This includes welcoming a female Green Beret into the ranks.

Times are changing, and the Army has certainly made it possible for women to prove that they can be just as strong as men.