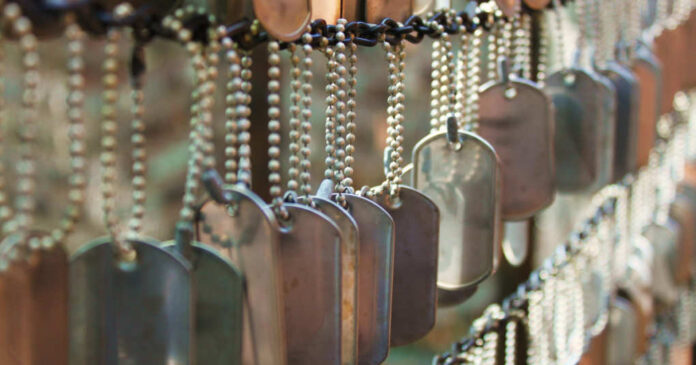 So what happened? Nobody seems to know but at least one investigative reporter set out to find some answers. ABC News investigative journalist James Gordon Meek had reported on the ambush when it happened but said it was so full of inconsistencies from the Army that he could never pinpoint the cause and finally gave up. Then he received a phone call.

The call came just recently from an old high school English teacher of his, Dave Sharrett, whose son, Army Private First Class Dave Sharrett II, was killed in 2008 in Balad, Iraq. He told Meek how the Army had said his son was killed by militant insurgents but that he had received conflicting reports from his sons battle-buddies who had served with him.

Meek decided to look into the matter only to discover that the Army Private had in fact been gunned down by the squad’s 1st Lieutenant, Timothy Hanson, who later faced charges.

Sharrett attended a Gold Star Family retreat where he spoke with the family of Jeremiah Johnson who lost his life in the Niger ambush. The family expressed their frustration with the Army over not providing them with any detailed information surrounding their son’s death.

Once again Sharrett called Meek to ask him if he would speak with the family, which he did. As it turned out, the families of the Niger victims had been in communication with one another and they all seemed to tell a different story as the Army had relayed it to them.

Johnson’s family had been told their son died in a gunfight the same time as Staff Sgt. Dustin Wright, but Wright’s family was told their son had died from mortar fire. Dustin Wright’s brother, Will Wright, who is also an Army veteran, upon viewing the body, knew the Army had lied. There wouldn’t be a body to view had his brother been struck by a mortar.

The Johnson’s had initially been told their son was missing in action and may have possibly been captured by ISIS. Then they said he was flung out of the truck he was driving during the ambush.

Meek told the Military Times, “As a human being it’s hard to see people suffer and the fact that they had this additional layer of doubt layered on top of their pain, whenever I see that happening, it hurts my heart.”

Pentagon officials accused the soldiers in Niger of going on a rogue mission to kill an Islamic State commander.  They also said the group wasn’t properly trained in “basic soldier skills.” Uh…these were highly trained Green Berets so if this is truly the case, it’s frightening and the Army has some explaining to do.

Meek asked the Military Times, “When in a generation have we had a combat incident where all of the fallen’s family members are saying ‘We were lied to’?” The families just want answers.

It looks like we’re all going to get answers when Meek releases his new documentary that took three years’ worth of investigating to put together. We’ll be watching.