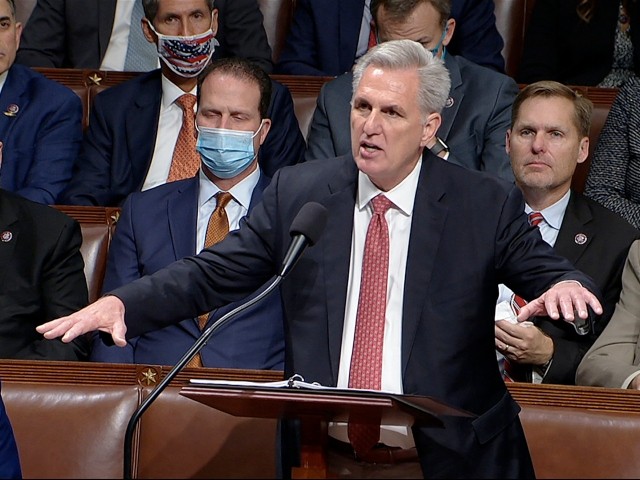 “My one minute is almost up,” McCarthy joked at 5:04 a.m., referring to the fact that members of the House were originally given only 60 seconds to state their views on the bill before a vote that was meant to have taken place on Thursday evening.

McCarthy’s address smashed the previous record — an eight-hour, seven-minute address by Speaker of the House Nancy Pelosi (D-CA) in 2018 in support of the Delayed Action for Childhood Arrivals (DACA) program, which benefits illegal aliens who arrived as minors.

Unlike Pelosi, who spoke during the daylight hours, McCarthy spoke all night long (though not in four-inch high heels).

Throughout the early part of his address, McCarthy was heckled and interrupted by irate Democrats, but the Republican temporarily on duty in the chair refused to tell him to stop, and repeatedly gaveled the House into order as he spoke.

Eventually, Democrats surrendered and adjourned the proceedings until Friday morning at 8:00 a.m., leaving McCarthy and the Republicans in the chamber to continue. Unlike the Senate, there is no “filibuster rule” in the House that suspends a vote as long as one member continues speaking, but McCarthy just refused to stop.

McCarthy broke down the bill, attacking it for lavish spending on Democrats’ favored special interest groups while raising taxes on middle-class Americans — and providing an effective tax cut for the wealthy in high-tax, Democrat-run states.

He noted that the bill does not spend on border security, or on expanding American energy production, and that Democrats rejected Republican amendments, including one to prohibit funding from going to the Chinese Communist Party.

Throughout his address, McCarthy was backed by Republican members, who sat behind him to present a unified appearance for the C-SPAN cameras, which continued to roll overnight.

Noting that his speech was the “longest minute ever given in this body,” McCarthy added that the country was at a “tipping point,” and that the bill — which will add $750 billion to the deficit in the first five years, according to the Congressional Budget Office (CBO) — represented a step toward socialist policies that had already failed in other countries, and government programs that could never be undone.

Democrats, citing their own analysis, claimed that the bill would reduce the deficit — a key point, since President Joe Biden has repeatedly claimed that it will add “zero” to the deficit and is “fully paid for.”

Republicans rose to their feet in a standing ovation as McCarthy finally finished and the House chamber emptied. Democrats are expected to hold the delayed vote later Friday morning.