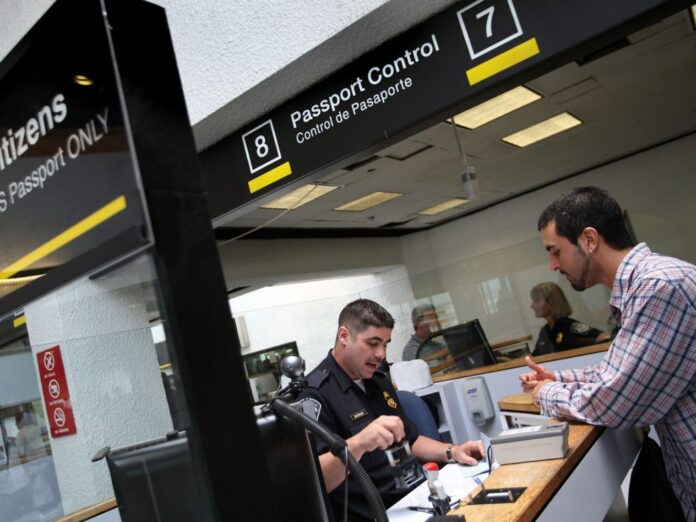 A few million other people, most of whom are already in the United States, would gain LPR [legal permanent residence, or green cards] status through the provisions in sections 60002 and 60003 or as immediate relatives of those who gain LPR status under the bill.

The beneficiaries include at least one million chain migrants — plus most of the one million foreign contract workers who are now using real or faked H-1B visas and other work permits to take jobs in the United States.

The bill provides the contract workers and their families the hugely valuable prize of U.S green cards. The cards can be converted into citizenship, voting rights, and the ability to bring in chain migrants, after just five years.

The prize is a reward from the U.S. government for taking the white-collar jobs needed by U.S. graduates.

The foreign workers, nearly all of whom are Indian, are being imported to create an investor-controlled compliant workplace for the nation’s skilled jobs.

Roughly one million contract workers are now working to get the green cards — and roughly 400,000 more are imported each year to take more of the jobs sought by each year’s cohort of 800,000 new U.S. skilled graduates.

The investor-driven outsourcing policy is enabled by government-enabled workplace discrimination against a once-powerful and prosperous political force — the U.S. professional class.

The establishment media — including its professional journalists — are hiding the scale of the migration expansion. Any media blackout will muffle the public’s reaction, so helping Democratic Senators and business lobbies shove the bill through the Senate.

But the rising GOP opposition is shown by a November 4 an op-ed from Sen. Bill Hagerty (R-TN) and Rep. Jim Banks (R-IN):

Buried in the “Build Back Better” legislation … are several jaw-dropping immigration provisions that would sell out American workers for the benefit of the largest and most influential corporate interests.

The business-funded advocates have begun publicly defending their push for new migrants: “These provisions would be largest update to our immigration system in 30 years,” admitted a November 3 tweet from the Niskanen Center, which supports the expansion of legal immigration.

Under current law, only about 140,000 foreign workers and family members can get green cards each year. The resulting multi-year backlog of roughly 1 million contract workers deters other Indians from taking jobs in the United States.

Alongside the rewarded Indian contract workers, the bill also opens the nation’s borders to at least 3 million pending migrants who have been sponsored by recent immigrants.

The CBO reference to “millions” suggests that at least one million of these waiting chain migrants will get green cards from the Democrats’ bill during the next 10 years.

The BBB bill says the current waiting list of 4 million chain migrants would be allowed to pick up green cards if they can fly into the United States as tourists. Fort example, a family of four would fly into Newark, N.J., and then buy the right to live and work in the United States for the price of just $2,400.

Currently, about 230,000 chain migrants get green cards each year, so the BBB legislation likely would double the chain migration inflow.

But the rapid inflow will also create a huge incentive for many more immigrants to sponsor their foreign relatives for chain-migration status. That incentive could rapidly accelerate the inflow because each new migrant could bring in their extended family about six years after getting a green card — and those migrants could try to bring in their relatives six years later.

The huge inflow would be a bonanza of new customers for business groups and government employees, such as teachers and social workers. It would also create a new power base for immigrant politicians, including the leader of the Democrats’ progressive wing, Rep. Pramila Jayapal (D-WA).

But it would be a disaster for ordinary Americans — and their children — because it will hold down their wages, spike the price of housing, and dilute Americans’ political and social clout in their own homeland.

The inflow would also spur many new conflicts over civics and diversity — so allowing politicians and journalists to ignore critical issues about education, productivity, research, and shared wealth.

For many years, a wide variety of pollsters have shown deep and broad opposition to labor migration and the inflow of temporary contract workers into jobs sought by young U.S. graduates.

This opposition is multiracial, cross-sex, non-racist, class-based, bipartisan, rational, persistent, backed by Democratic voters, and rests on the solidarity that Americans owe to each other.