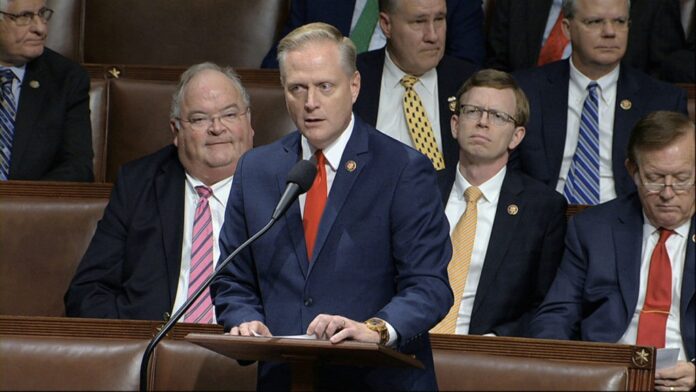 “We’re working to undo the illegal mandates for vaccines by Joe Biden. [It’s] clearly an overreach of authority to have OSHA, Occupational Safety and Health Administration, come to private employers and dictate to them whether or not their employees have to be vaccinated to have a job,” Keller said.

“In America, we have personal liberties and freedoms, and this is an overreach. And what we’re doing is we’re working to strike down that mandate and we know we’re on the right path,” he said, noting the stay placed on the rule after a flurry of legal challenges.

Keller introduced the Congressional Review Act (CRA) resolution last week, and at the time of its introduction, it had over 160 GOP members supporting it. Sen. Mike Braun (R-IN) introduced a companion bill in the Senate, which has the support of all 50 Republican senators.

The Pennsylvania Republican explained the process of CRA, noting it must be passed by both chambers and land on the president’s desk. Keller said they want to bring it up for a vote and send it to Biden “because what it will say, it will say, if there’s a member of Congress who does not support this, you’re basically saying you’re with authoritarian rule [and] taking away people’s personal rights and liberties.”

“And if you sign on with it and join us, in striking down this mandate with the Congressional Review Act, you’re standing with the American people in making sure that the government doesn’t become too big and take your rights and liberties,” he said.

Ultimately, Keller said they are “pushing to do everything we can to get this out of the Senate and House and, quite frankly, get the president to veto it. This is where it’s at.”

Mere days after introducing the resolution, a 218 majority in the House is in sight for Keller and the GOP.

“Anybody that doesn’t sign on to it can’t claim to want to protect your liberties and freedoms. We took an oath to uphold the Constitution of the United States, which guarantees us rights. It tells us we limit the power to the government, we the people, not the other way around,” he said.

This particularly applies to a vaccine mandate “of telling people what they have to do to keep a job or get a job,” he said. It is “clearly” illegal and “should not be done at all,” he added, noting there are Democrats in districts that will not put up with this. He warned that they better join Republicans in trying to repeal the mandate.

When asked if he would try to attach the measure to other legislation, Keller said their goal “is to gain that support simply by saying this is how clear this case is.”

“You either stand with the overreach of power from an executive, or you stand with the freedom and liberties and the American people. That’s the difference between supporting this and not supporting this,” he said, adding that he is optimistic that they can have all Republicans “at least” on board next week. Then, they will work with Democrats.

This is all part of the broader effort to strike down the OSHA rule, which has been challenged in court. The CRA is great, Keller said, because “if you strike down any regulation with the Congressional Review Act, they can’t bring it up again.”

“It forbids them from making the regulation again in the future by any other administration” because it has the force of the law, he said.

“If the president would have the audacity to veto it, I would hope we have enough members of Congress to say you don’t have that authority and we’d override a veto,” Keller said.

When asked what negative consequences there would be if the OSHA rule went into effect, Keller said the “most important thing” is it taking away people’s fundamental liberties. He also said the mandate defies logic with an “arbitrary limit of 100 employees, whether they work at one location or not.”

Ultimately, it will make it more difficult for businesses to expand — particular those that are on the cusp of 100 employees.

“They’re going to rethink,” any moves, he warned, adding that others will just retire early, resulting in more people leaving the job market.

“The last thing we need is more mandates, more government intrusion. It’s hard enough to get employees right now. We do not need to be competing with the government or their mandates making it harder for us to attract and retain our employees,” he said, adding that President Biden is “so out of touch with what happens.”

Unlike leaders in Washington, DC, including President Biden, Senate Majority Leader Chuck Schumer (D-NY), and House Speaker Nancy Pelosi (D-CA), Keller said he knows what it is like to work in a factory and run a business.

“They’re people that have been in Washington, DC, far too long … they’re so out of touch. They’re not working class people. They’re not people who are in touch with the values and work ethic of the American people,” he told Breitbart News Saturday.

Keller added that Americans can help by talking to their friends and family members and calling their representatives, demanding their support of the CRA.