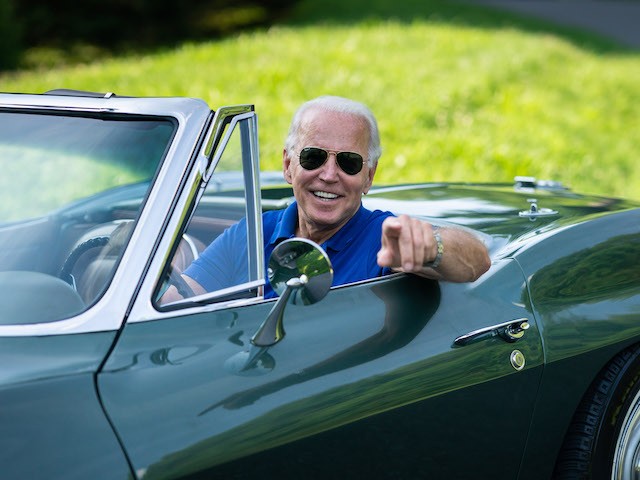 On Tuesday, the White House announced that the U.S. would release 50 million barrels of oil from the Strategic Petroleum Reserve in an ploy to bring down the price of gas. The immediate market response was a jump in the price of gas by 3.3 percent to over $82 a barrel.

Biden also claimed, falsely, that Americans were being overcharged by gasoline companies that were not passing on cheaper wholesale prices.

The price of gasoline in the wholesale market has fallen by about 10 percent over the last few weeks. But the price at the pump has not budged a penny. In other words, gas supply companies are paying less and making a lot more. And they do not seem to be passing that on to consumers at the pump. In fact, if the gap between wholesale and retail gas prices was in line with past averages, Americans would be paying at least twenty-five cents less per gallon right now, as I speak. Instead, companies are pocketing the difference as profit. That’s unacceptable. And that’s why I’ve asked the Federal Trade Commission to consider whether illegal and potentially anticompetitive behavior in the oil and gas industry is causing higher prices for consumers. So we can assure the American people are paying a fair price for their gasoline.

When prices are falling, this can mean that gasoline station margins widen. But the opposite is true when prices are climbing: this can squeeze margins.

“This delay in passing along wholesale price changes to consumers typically results in lower margins during periods of rising crude oil prices and higher margins during periods of declining crude oil prices. The price of crude oil is volatile, and significant price changes take time to work their way through the refining and distribution sectors before reaching consumers,” writes the Department of Labor.

It is also true that price declines tend to be passed through more slowly than price increases. Exactly why this is so remains a matter of debate.

Let’s go to the Department of Labor again for the competing explanations.

One explanation from the Association for Convenience and Fuel Retailing is that wholesale prices, local competition, and consumer behavior contribute to this behavior. The pass-through delays caused by the time it takes to refine and distribute product provides retailers with an added layer of protection from short-term price shocks. In addition, price-conscious consumers and local competition may lead to retailers adjusting retail prices gradually to avoid price shocks to consumers. Under this gradual price assumption, retailers receive smaller margins when wholesale costs increase and larger margins when wholesale costs decline. With this pricing approach, retailers can recoup lost profits from prior wholesale price advances by delaying retail price declines during periods of falling crude oil prices.

The second position, commonly referred to as the “rockets and feathers” phenomenon, was noted recently by researchers at the St. Louis Federal Reserve Bank. This theory argues that wholesale price delays and imperfect local competition largely contribute to the difference in pass-through speed during crude oil price increases and declines. Rising crude oil prices quickly push up wholesale gasoline prices, and as a result, retailers rapidly increase their prices to preserve their narrow margins and maintain profits. This direct pass-through of wholesale price increases results in a rapid rise in the retail prices consumers pay for gasoline. The speed of the increase is compared to that of rockets lifting off. Conversely, during periods of declining crude oil prices, some retailers can hold on to higher margins due to limited local competition and therefore have less incentive to pass along lower prices to consumers. This slow pass-through of price declines is compared to feathers drifting slowly to the ground.

Importantly, this is a persistent phenomenon and it is caused by local competitive conditions. Under the rockets and feathers approach, which most closely resembles President Biden’s perspective, gas station operators will be able to keep prices higher in areas where they face less competition. So, contrary to Biden, this isn’t a question of “gas supply companies” engaging in illegal or anticompetitive behavior.

(That big spike in 2020 came from the crash of wholesale prices that took a short while to get passed on to consumers.)

What about prices at the pump compared with crude oil? Here also the current ratio of 24.48 to one is slightly below the long-term average of 24.98 to one. In other words, a gallon of gasoline typically costs around 25 cents for $10 of the price of a barrel of oil and now it costs a bit less than that. Here’s the chart (and, again, you can see the crash associated with the pandemic).

In short, what’s happening now in gasoline prices looks normal given what we are seeing in global oil prices. The problem is likely not illegal or anticompetitive behavior by gas stations but the inflation loosed upon the global markets by the combination of profligate government spending, accommodative monetary policy, and anti-fossil fuel politics of the Biden administration.