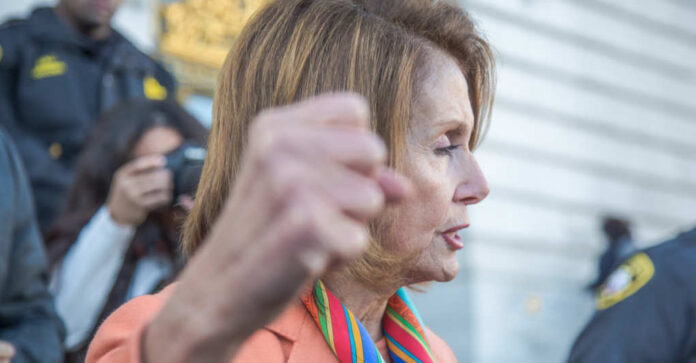 Separation of Church and State. Something every American can get behind. Something our founding fathers built this country on, and something many people of this country believe in, to their very core. Yet from abortion to illegal immigration, and now to climate change, somehow God is getting involved in all of this. Now House Speaker Nancy Pelosi wants to invoke him as her reason for climate change spending.

“For me, it’s a religious thing.  I believe this is God’s creation, and we have a moral obligation to be good stewards. If you don’t share that view, you must share the view that we have an obligation to future generations.” This statement goes at least in part against everything this country was founded on. The idea that God means you must vote a certain way is ludicrous and immoral. Now, these statements also come on the heels of the United Nations Climate Change Conference (COP26) in Glasgow, Scotland. While there Pelosi led a 21-member Congressional delegation to represent the U.S.

While there Pelosi accomplished a lot of finger waving, glad-handing, and the making of empty promises. From things she cannot personally guarantee to things she has no control over, she much like President Biden made a mockery of herself and the reason they were there in the first place. She sold the climate change portion of the $550 billion spending bill as something also for national security.

Under the belief that climate change will mean rising sea waters, she made no bones about her worries of conflict over competition for habitat and natural resources. Never mind the fact that the globe is acting as it has for trillions of years, and this is not ‘climate change’ as the left would love people to believe, but it’s just a part of the Globe’s natural cycles.

She has goals with this sending bill’s passage. She wants “good paying union jobs and keeping the United States preeminent in green technology throughout the modern world.” Yet she negates to notice just how heavily our daily way of life relies on fossil fuels. People who manufacture green energy products have been interviewed time and time again.

There is no room to make cheaper or faster products than they are making now without cutting corners that severely compromises the integrality of their products. They see their innovations as something to be protected and are right. They need to be made correctly and produce good results for the dollar, otherwise, people will not jump to them. Furthermore, if they are made poorly and fail quickly, then that means more landfill waste; at which point, they shouldn’t have gone green in the first place.

Pelosi may have ‘good intentions’ behind her message, but it spits in the face of the principles on which this country was founded. Pelosi needs to remember where she comes from, and what is important to most Americans. While some will bow to her supporting God in the government, the Patriots won’t, and most of them already never would anyways. She is doing herself no favors with this latest campaign for change, and if she wants improvements to be made and more people to back her, this isn’t going to do it.

So perhaps we should be thanking her for taking such a ‘brave’ stand on this issue. It really does make the idea of getting more people to go against her even more fiercely an easier topic to make happen. She just has to keep being herself, and it should get even more Democrats out of their offices in record time.