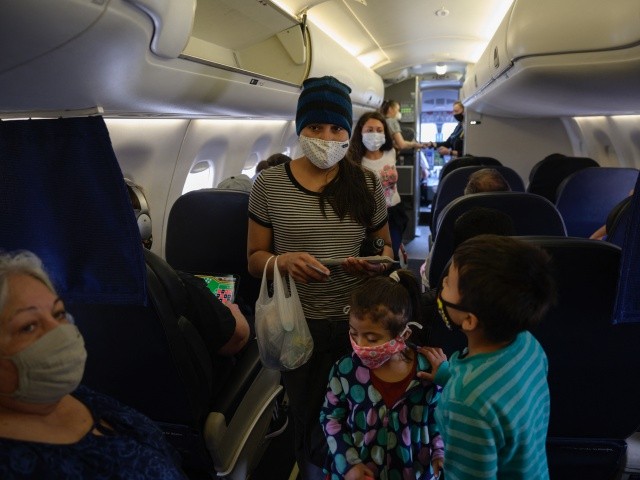 The issue came to light in Florida after a 24-year-old illegal alien allegedly posed as an Unaccompanied Alien Child (UAC) at the United States-Mexico border in order to get released into the U.S. interior. From there, the illegal alien was flown to Florida and is now charged with murdering the man who took him in, a father of four.

Gov. Ron DeSantis (R-FL) said he is reviewing a plan that will deny state contracts to the companies contracting with the Biden administration to fly border crossers into the state.

In a letter to Department of Homeland Security (DHS) Secretary Alejandro Mayorkas and Attorney General Merrick Garland, Rubio, Scott, and Florida’s Republican delegation in Congress are asking the administration to disclose how many flights of border crossers have landed in Florida, the number of border crossers onboard, and their immigration statuses.

We write with great concern over the reported transfer of migrants from our southern border into or through the State of Florida. Media accounts show that at least 70 flights that originated from border states have landed at Florida’s airports, without any information of who is on the flights and their final destination. This does not include ground transportation. [Emphasis added]

The crisis at our southern border has been well documented. However, the transfer of illegal immigrants into our communities has been done under the cover of night and with a veil of secrecy. Our constituents are naturally concerned about potentially dangerous individuals residing in their neighborhoods. The state, local law enforcement, and those elected to represent Floridians deserve to know what the federal government is doing, especially when it is a matter of public safety. [Emphasis added]

For these reasons, we request a full accounting of the administration’s actions on these chartered flights and ground transportation, including who is being transported, their immigration status, whether they have been tested for COVID-19 or have shown proof of vaccination, final destinations and any applicable security reviews performed. Information should also include when the transportation first took place, the number of migrants transported to date, as well as future planned or estimated travel, whether state, county or local government entities were alerted prior to arrival and any federal resources provided to assist with the migrants, and any follow-up actions, including whether a notice to appear was issued. [Emphasis added]

As Breitbart News recently reported, a number of non-governmental organizations (NGOs) are working with the Biden administration to provide border crossers with free hotel rooms and free flights into the U.S., giving them the ability to bypass TSA requirements that American citizens are required to follow.

Last week, Mayorkas said the administration expects that more than two million illegal aliens will have arrived at the U.S.-Mexico border in 2021 by the end of the year.

Mayorkas did not disclose the number of illegal aliens who have successfully entered the U.S. through the southern border. Current estimates based on DHS data reveal that anywhere from 530,000 to 600,000 illegal aliens have been released into the U.S. interior by the Biden administration from January to September.