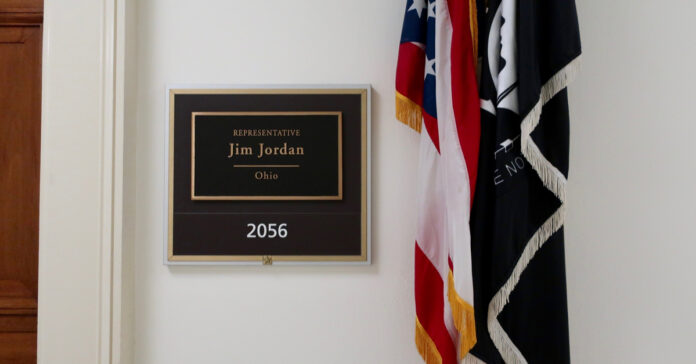 Rep. Jim Jordan (R-OH) took to the mic on Thursday to demand the FBI submit to the House Judiciary Committee any records of counterterrorism tools the agency used against the outraged parents at local school board meetings per an exclusive report from Breitbart News.

Serving as a ranking member on the Judiciary Committee, Jordan sent a letter to FBI Director Christopher Wray, where he detailed the committee’s requests. This comes on the heels of Jordan publishing an email from an FBI whistleblower, who revealed the agency’s counterterrorism and criminal divisions had introduced ‘threat tags’ for the FBI to categorize people who made any threats against school administrators. Considering how easily a person speaking up on their child’s behalf can be taken as a ‘threat’ in 2021, this is especially troubling.

The letter is not a very warm and friendly one either. “We are investigating the troubling attempts by the Department of Justice and the White House to use the heavy hand of federal law enforcement to target concerned parents at local school board meetings and chill their protected First Amendment activity.” This opening alone should have hair standing up on the back of your neck, as this is not what America is about.

For Joe Biden and the rest of his administration, this is a very troubling accusation. The FBI has long since been suspected of causing problems for the American people, and for being overbearing in their actions, but attacking and vilifying school board meetings is a new level of low for them.

On October 4t Attorney General Merrick Garland released a memo requesting the FBI begin their involvement in school board meetings, stating there was a “disturbing spike in harassment, intimidation, and threats of violence against school administrators, board members, teachers, and staff who participate in the vital work of running our nation’s public schools.” Mind you the National School Board Association wrote to President Biden on September 30th to request help in the face of an uptick in reports of problems.

It’s amazing how quickly the school board can get a response requesting national FBI involvement with some angry parents, but it takes months to years for our Veterans to get the benefits they paid for in blood, sweat, and tears; or the months it takes to get a tax stamp back to exercise portions of your second amendment rights. Seems like the leftist version of the FBI is more worried about being able to trample on the rights of the people than actually doing their job.

While Garland has been defending their involvement and guaranteeing there has been no counterterrorism conducted at school board meetings, Jordan is questioning the authenticity of these statements and their accuracy and completeness. Considering someone had to use whistleblower protection to come forward on these attacks, it would seem reasonable to suspect that the FBI is doing the wrong things; yet again.

There never should be fear in the minds of the parents for going to school board meetings. It should be very simple and straightforward for them to stand up and take a stand on behalf of their child’s wellbeing. They should not be vilified for trying to take an active interest and making sure things are happening correctly. Yet if the FBI and the rest of the alphabet boys have their way, even objecting with the school board’s opinion would be criminal. How much more of this cancel culture and vilification are the American people supposed to take?