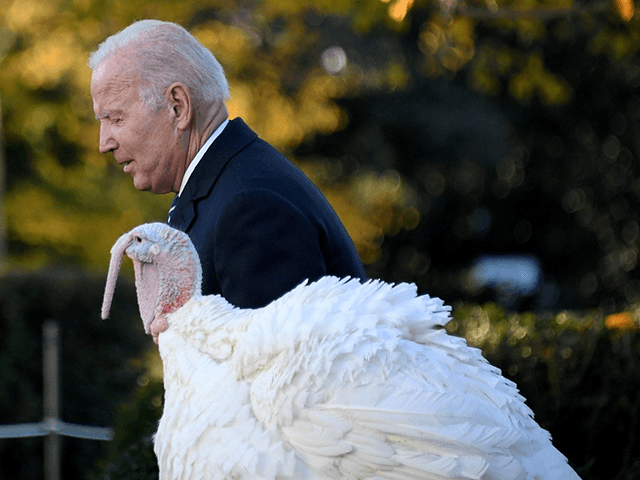 Biden called into Al Roker’s coverage of the Macy’s Thanksgiving Day Parade, when the host wanted Biden’s “message to the American folks on this day.”

“My message is after two years, you’re back, America’s back, there’s nothing we’re unable to overcome, Al,” Biden said. “And you’re one of the reasons for that. You’re always up and moving.”

Roker thanked the 79-year-old and told him “Santa is coming,” to which the president replied, “I’m waiting for Santa.”

Americans are facing the most costly Thanksgiving on record, as Breitbart News’s John Carney reported, “thanks to the inflationary fiscal policies of President Joe Biden’s administration.”

“The price of turkey is a huge driver of this year’s Thanksgiving inflation,” Carney reported. “Absent turkey, however, the average cost is still up 6 percent, according to the Farm Bureau.”

As inflation reaches a three-decade high, Biden and his family are spending Thanksgiving at the compound of a private equity billionaire in Nantucket, Massachusetts.

All the while, the president’s approval rating has scraped a new low “showing barely 42 percent,” as Breitbart News reported. In that poll, inflation was the top economic issue for respondents by far, holding 39 percent.