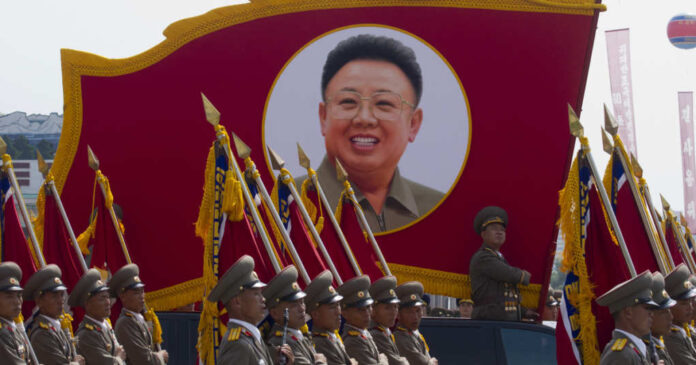 The world’s been wondering what became of N. Korea’s rolly-polly dictator, Kim Jong Un. Not that he’s been missed. It’s just been odd not hearing the little rocket man deliver threats he can’t possibly deliver on or watching him smile with glee as he fires one off into the ocean. Wonder no more. A much thinner and somewhat healthier-looking Kim has materialized from thin air.

Apparently, he’s been spending time at the drawing board. In the midst of N. Korea’s severe famine where food thieves are being shot on sight by royal guards watching over crops, Kim has visions of grandeur. He’s been thinking fairly big for such a little squirt.

Plans have been laid out for N. Korea to build the most futuristic city in the world, right next to the Chinese border. Kim was seen strolling the grounds where construction has already begun prior to visiting nearby Mount Paektu, a mountain held sacred as the place where Kim’s family grew their roots.

The small town of Samjiyon, located in the northern Alps, is getting a complete overhaul. N. Korean officials are saying the new city will be a “socialist utopia,” and an enormous economic hub. They’ll be a plush ski resort, fancy hotels, new shiny apartment complexes, cultural centers, lots of commercial activity, and state-of-the-art medical facilities. Who wouldn’t want to live there?

The official news agency of N. Korea, state-run KCNA, said the new city will be the “epitome of modern civilization.” After experiencing delays caused by the pandemic and various sanctions, construction has resumed and is well underway. Letting no grass grow, KCNA said it should be completed by the end of the year. Fortunately for N. Korea, there will be no further delays due to pesky things like safety inspections and the sort.

Usually, when Kim goes into seclusion it raises widespread speculation over his health, but with COVID-19 ravishing the hermit nation, it was almost certain he was either on a ventilator or had cashed in his chopsticks.

Because of Kim’s marked weight loss, it’s thought that he may have recovered from a bout of COVID-19, but South Korea’s intelligence agency that monitors N. Korean activity said they were not aware of any health issues.

Speaking on behalf of Kim Jong Un, KCNA said, “He said Samjiyon has turned into an example of a mountainous modern city under socialism and a standard of rural development thanks to the workers’ steadfast struggle despite the unfavorable northern environment.” Loosely translated; “The workers were slaving through the dead of winter in the Alps because they had no choice.”

As N. Korea continues facing additional international sanctions over their insistence on building nuclear missiles, Kim is striving to create a “self-reliant” economy where they won’t need anyone’s help, but if they do, China is only a step away and they’re still cool with each other.

So is Samjiyon going to be a flip or a flop? Kim is banking on the city attracting foreign money as a leading world trade center, but…It’s North Korea for your higher power’s sake. Raise your hand if you think it would make a great vacation spot. Anybody… Anybody…

Kim also can’t seem to realize that without investments coming in from the US, the EU, Japan, and countless other first-world nations that think he’s an idiotic tyrant, he’s building a ghost town in the mountains.