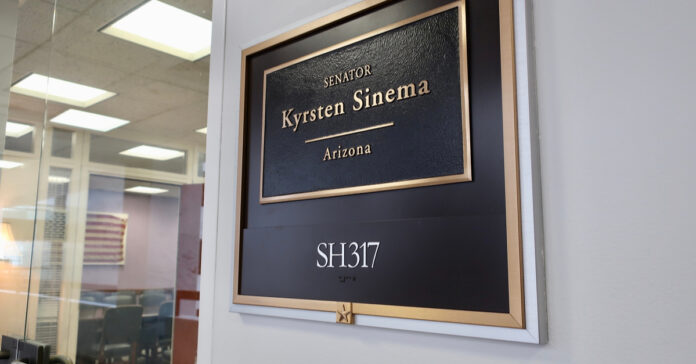 Senator Kyrsten Sinema, the Democrat from Arizona, is calling them as she sees them. She is blatantly giving credit to her Republican colleagues in the House for passing the infrastructure bill. Sinema said that the measure did not have enough votes to pass with only Democrat supporters.

“The 13 Republicans who voted yes on that bill in the House, and many of whom are now receiving death threats, they deserve a much greater share of thanks than they received,” Sinema said according to Politico.

She went on to explain that Speaker Pelosi did not have the Democratic votes to pass the bill on a one-party vote. This vote wasn’t just a one-off, there were nineteen Republicans who also voted for the measure when the legislation was up in the Senate last summer.

The Arizona senator did not end her assessment of what happened there. She also gave a great deal of credit to the Congressional Black Caucus for pushing for the bill. Sinema said that they did a lot of the heavy lifting that enabled the bill to get across the finish line in the House. And she also criticized the politicians who promised things that they could not achieve just to gain some political favor.

“You’re either honest or you’re not honest. So just tell the truth and be honest and deliver that which you can deliver. There’s this growing trend of people in both political parties who promise things that cannot be delivered, in order to get the short-term political gain,” Sinema declared.

It was just on Monday that President Joe Biden signed his much loved $1.2 trillion Infrastructure and Jobs Act after a long time of negotiations and setbacks. If you follow the expert reports on this issue, they are saying that the bill allocates about $550 million toward various projects like transportation and broadband. The president has talked about the legislation as “historic” and as something which would help the American middle class.

“Most of all it does something truly historic,” Biden gushed at the signing ceremony earlier this week. “I ran for President believing it was time to rebuild the backbone of this nation which I characterize as working people in the middle class. They are the ones who built the country.”

Many Republicans were not pleased with the passage of the bill and some of them actually accused their GOP comrades who voted for it of bailing out a failing Biden administration. For instance, Ted Cruz, the GOP senator from Texas, told the House Republicans who voted for the legislation that the Biden administration and the whole Democratic Party had an agenda that was on the rails. He actually said that their agenda was failing, “on the way to going down.” He went on to say that what the Republicans did was to breathe life into the Democratic agenda. He said they gave Joe Biden a political win and now he was going to ride across the country “touting,” and getting people to look at his big, bipartisan win.

Cruz wasn’t alone. Congressman Chip Roy (R-TX) was intensely critical of his colleagues in the House who voted for the bill. He said that a Republican majority isn’t enough and that just days ago there were thirteen Republicans who voted with Democrats to advance Biden’s agenda. He challenged his party to be a majority block that will fight for America’s agenda and have the courage to speak the truth and take on the “21st-Century tyrants of Big Tech and Big Pharma and—yes—the go-along, get-along establishment in our own party.”

This language is in Roy’s new campaign ad, according to The Daily Caller.

I wonder if the Republicans who broke rank have really heard Sinema’s tongue in cheek “thank you?” Let’s hope that next time, they toe the party line.