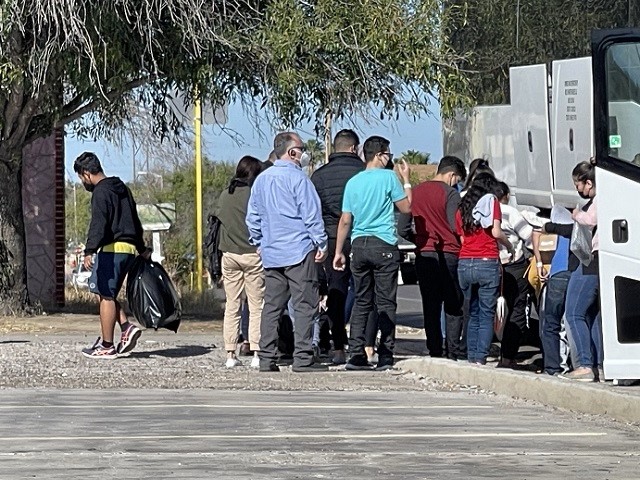 The source says the nationalities of the migrants were a mix of mostly Venezuelan and Cuban migrants. The source, speaking on the condition of anonymity, says the nearly 300 migrants are being held under the port of entry while they await transportation to nearby Border Patrol stations in the region.

As reported by Breitbart Texas, the area that once provided temporary shelter to nearly 15,000 migrants under the international bridge was being used again to shelter migrants as they awaited transportation in early November. The overcrowding at Border Patrol stations in the sector is one factor impeding the Border Patrol from rapidly transporting migrants from border crossing points.

The overflow staging area drew international attention in September as officials held thousands of mostly Haitian migrants in the outdoor facility in filthy conditions. During this crisis, migrants were held outdoors in self-constructed cardboard and thatch huts for several weeks.

These migrants will ultimately be removed from the area and processed for removal according to the source. Although some single adult migrants were among the group, family units with small children will likely be released into the communities surrounding Del Rio the source says. In what is becoming a revolving door process, on Sunday several busses from local Border Patrol stations released hundreds of migrants to a non-government shelter in Eagle Pass.

The Del Rio Sector ranks second in the nation in migrant apprehensions, only behind the Rio Grande Valley Sector, according to CBP reports. The apprehension of numerous large migrant groups within the Del Rio Sector recently is compounding the logistical problems currently facing the agency.

Recently, in one single event, a group of nearly 200 mostly Central American migrants crossed the Rio Grande near Normandy, Texas, just thirty miles away from Del Rio. According to the source, a large portion of the detained population at Del Rio Border Patrol stations consists of single adult migrants. The Border Patrol relies on ICE to find suitable, longer-term detention spaces for the single adult migrants and is also a complicating factor that adds to the overcrowding at temporary processing centers.