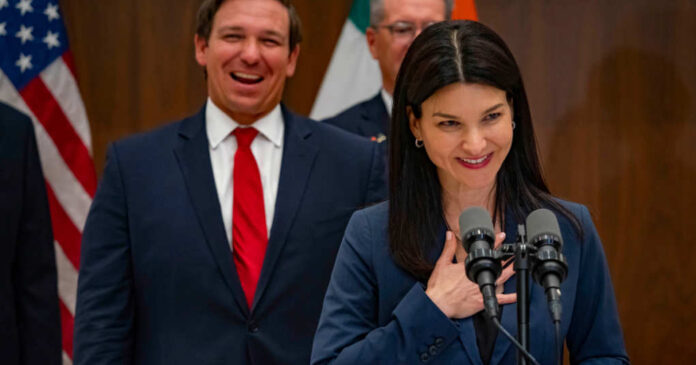 Florida is leading the way when it comes to passing bills to keep people from being dominated by mandates being issued by the president.

The latest bill that the legislature has passed deals with Biden’s jab in the arm mandate. The old man wants to force every company in the nation to require 100 or more employees to be vaccinated, or each company will face massive fines.

The brunt of Biden’s illegal mandate is being felt by those with religious causes for not complying and others who have already had the virus. They are being told to choose between their jobs or obedience. And companies are feeling the weight of not having enough workers to carry the workload.

Ron DeSantis saw the need to protect companies and workers from what would have been a game-changer in Florida. The governor promised to keep federal overreach from affecting people in the Sunshine State, and he is delivering on his promise. Biden is being kept out of the state, and there is nothing he can do about it.

DeSantis was so passionate about limiting Biden’s overreach into Florida that he called for a special session of the legislature to deal with the trouble heading down from Washington. The governor stated that “We’ve accomplished an awful lot in the state of Florida, but I can tell you this — we’ve only begun to fight.”

Joe Biden’s vaccine mandate is a form of evil that takes personal freedom and dislodges it from everyday life. He is so liberal that he aims to socialize the country and make people bow to the wishes of an evil dictator.

The campaign that Biden ran under was that of a moderate Democrat, and he was supposed to have been that middle voice that was to bring the country together. At least, that is what he was promising to deliver changes for all Americans. But all he has done is pander to the extreme liberals and throw everyone else under the bus.

The state-level Democrats are expected to vote against what the governor is waiting for the state. They would instead let Biden overrun the state and kill off everything that makes Florida great.

The Florida Legislature is the perfect example of how politics should work in America. The governor had a long list of things he wanted, but some Republicans had different opinions.

Every person had a chance to voice their opinions, and things were changed to enlist a majority vote. But at no time were their violent protests or actions taken just because they did not get what they wanted.

The Senate President is Wilton Simpson, and he noted that “We philosophically were exactly where we are today — all of us — but we did not sit down and pre-negotiate.” The process of passing a few protections was quick and concise.

They did not like DeSantis’s desire to strip COVID liability protections from the private sector. But those debates are what make the state a great place to live.

Simpson stated that “there’s things I’ve talked about publicly that never happens either.” His point was that government is about working together and something that the federal level liberals need to learn.

The bill protects private businesses against the mandate; parents can sue schools’ local governments over mandates imposed on the kids and make local businesses decide what they need to do about mandates.

DeSantis is deadly serious about protecting Americans from illegal actions, and he is leading the fight against Biden and NASA from forcing people to comply with the mandate.

The lawsuit noted, “Because the government’s unlawful vaccine requirement seeks to interfere with Florida’s employment policies and threaten Florida with economic harm and the loss of federal contracts, the State seeks relief from this Court.” It’s a sad day in America when the people need protection from its federal leaders.