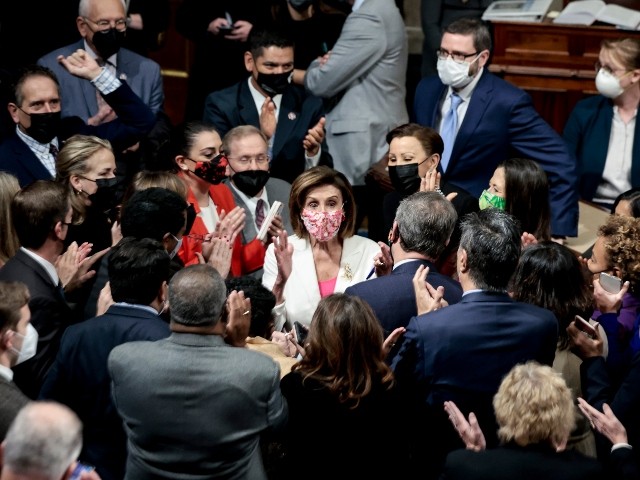 Vulnerable Democrats will be facing tough reelection battles across the county, having to campaign in districts that more than likely have different lines after redistricting in addition to their having sided with President Joe Biden on many key partisan issues, as his approval numbers after only holding office for ten months have tanked.

This week, vulnerable Democrat Rep. Tom Suozzi (D-NY), a loyal confidant of Pelosi, was the eighteenth House Democrat to announce he will be leaving the House to join the crowded race for New York governor. He will be leaving behind a largely suburban district, which would be tough for Democrats to hold without a strong incumbent. This willl potentially give Republicans a pickup seat in New York because Democrats have struggled to find new candidates willing to run for office.

Suozzi joined the ten Democrats who announced they are retiring from public office after the current term, which expires in January 2023: Reps. Filemon Vela (D-TX) and Ann Kirkpatrick (D-AZ) announced their retirements in March; Rep. Cheri Bustos (D-IL), the former Democratic Congressional Campaign Committee (DCCC) Chairwoman, announced she would not seek reelection in April; scandal-ridden Rep. Ron Kind (D-WI) announced he would be retiring in August; House Budget Committee Chairman Rep. John Yarmuth (D-KY) announced, along with longtime Reps. David Price (D-NC) and Mike Doyle (D-PA), they would both not be seeking reelection in October; Rep. Jackie Speier (D-CA) announced, along with longtime Rep. G.K. Butterfield (D-NC) and House Science, Space, and Technology Committee Chairwoman Eddie Bernice Johnson, they would both not seek reelection in November.

With the news of retirements and members seeking other offices, there is rumored to be more from Democrats abandoning ship in the coming months leading up to the election. In addition, there have been reports of Pelosi herself contemplating leaving elected office.

Mike Berg, the spokesman for the National Republican Congressional Committee, which is in charge of helping Republican incumbents and winning back the House majority, told Breitbart News exclusively that “Nobody wants to run as a House Democrat this cycle because all Democrats’ majority has given the American people is higher prices, skyrocketing crime, and open borders.”

Breitbart News has extensively reported on Pelosi’s majority crumbling in the past. Democrats have struggled to find new candidates to run in some congressional districts, along with some Democrat recruits dropping out of races. This comes as some members are yet to announce their intentions for next year, which will continue to sink Pelosi’s chances of keeping the majority.

At the same time, Democrats will have to get elected in some entirely new districts. In October, embattled Rep. Vicente Gonzalez (D-TX) announced that he is abandoning his constituents and his seat to run in a new district instead of for reelection in his now-competitive congressional district. Republican opponents have long sought out the seat he currently holds.

In September, a report from Politico outlined that House Democrats spent their last two elections (2018 and 2020) talking about their achievements unseating members in red districts — which have since gotten more competitive over the years. This happened as the majority of the districts where millions of dollars and hundreds of hours were spent fighting Republicans could disappear after redistricting.

President Joe Biden saw his lowest job approval numbers. Biden’s job approval found a new low of 36.4 percent during the first nine months of his presidency, according to a Zogby poll. While the poll also found that 61.3 percent of the respondents gave Biden a negative rating, the president was underwater with all age categories, particularly the younger generation of voters between 18 and 29, which viewed him 63 percent negatively and only 34 percent positively.