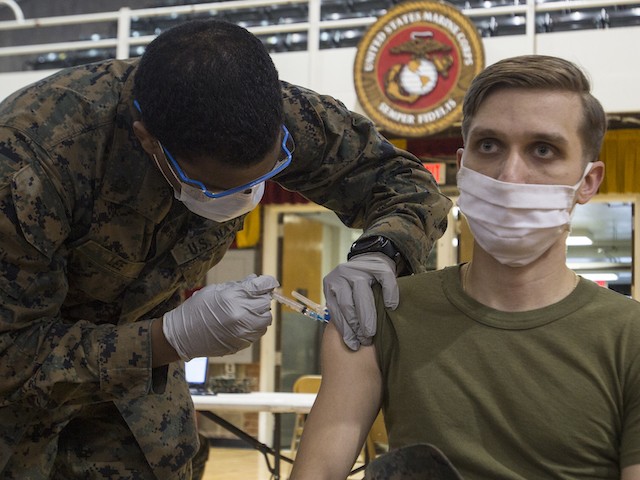 The service announced Monday that the deadline was reached on Sunday, November 28, with about 95 percent of its active duty force having gotten at least one dose, but about five percent unvaccinated.

Among about 180,000 active duty members, that amounts to approximately 9,000 or more active duty Marines who are not fully vaccinated as required by the Biden administration’s mandate for all service members in August.

The Marine Corps warned in October that Marines who do not comply with the mandate will be separated. The Navy secretary has said they will not all be kicked out the day after the deadline, but it is unclear what happens next.

“We will be addressing each case on a case-by-case basis,” Navy Secretary Carlos Del Toro told reporters last week, according to Task & Purpose. “We’re just not going to all kick them out on the day of the deadline itself.”

He indicated the Navy, of which the Marine Corps is a component, would give Marines an opportunity to change their minds. He reportedly said:

We’re going to try find out what’s their problem and holdup in getting the vaccine, try to counsel them the best we can, offer them an opportunity to change their mind with regards to the vaccinations. Hopefully, they’ll get the vaccination at that point in time. And if they don’t, obviously, then they’re not going to be able to continue serving in the Marine Corps.

Those who have exemption requests pending will not face consequences until their request have been adjudicated, and there are still hundreds in the works.

The service finally revealed the number of those who applied for religious accommodation from the vaccine mandate — 2,441.

The Marine Corps said that 1,902 have been processed and “zero requests have been approved.”

The across-the-board denials come despite the military archbishop, Reverend Timothy P. Broglio, issuing a statement last month that although the Catholic Church has deemed the vaccines to be morally permissible, it does not preclude a service member from believing that the vaccine would violate their conscience.

The Marine Corps said regarding its denial of religious accommodation requests:

The Marine Corps’ process for evaluating requests for religious accommodation that require an exception to policy follows a rigorous approach to ensure Marines receive due consideration. The process begins with an interview at the Marine’s unit with the chaplain and an endorsement by the first general officer in the chain of command. The request is forwarded to Manpower and Reserve Affairs where it is evaluated by a 3-member Religious Accommodation Review Board as well as by health services and legal. The recommendations from these representatives are forwarded to the deputy commandant for M&RA for final determination. The Marine Corps uses a centralized approval authority for these requests to ensure consistent adjudication of the requests.

The Department of the Navy does not normally grant religious accommodations for vaccinations.

Marine Corps reservists have until December 28 to get fully vaccinated.

By November 18, only 66 percent of Marine reservists were fully vaccinated and 75 percent had at least one dose of a vaccine.

Marine Corps Commandant Gen. David Berger said in a statement on Monday, “I have great appreciation for all those who made these vaccinations possible, including the civilian and Navy medical personnel who worked tirelessly over the past months to protect our Marines and families.”