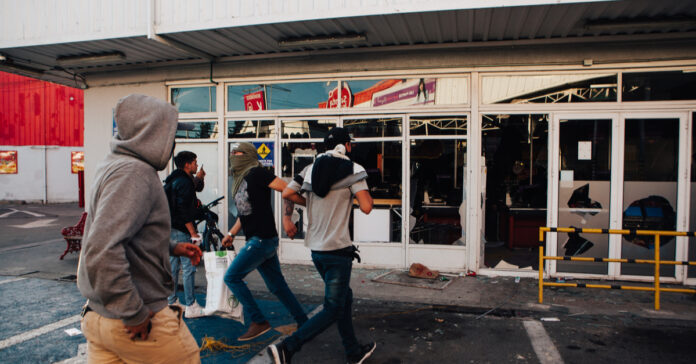 Black Friday was marked by a significant amount of looting. Stores across California and many other liberal states were broken into, stolen from, and massively looted on the shopping holiday.

Many who did the looting claimed it was in the name of racial justice.

Wait, didn’t we move past this? Didn’t we decide that looting innocent stores isn’t the way to address racial justice? Apparently not. And, it’s proof that Black Lives Matter is still alive and well.

There’s no way to solve any kind of racial injustice by destroying stores. On Black Friday, some stores saw hundreds of thousands of dollars of mass destruction. And these stores did nothing wrong. They simply opened their doors to holiday shoppers. They weren’t racist. They weren’t looking to make a political statement. They simply offered sales as they do every year after Thanksgiving.

As Shauna Weirich, the store manager for a Sunglass Hut in Monterey, California explained, “They just knew what to do. No rhyme or reason for it they just knew what to do, when to do it and how to get the most out of what they were doing.” They were in and out in about two minutes and stole approximately $30,000 worth of sunglasses.

Another store, a Home Depot in Lakewood, California, had to close the front entrance against the looters. However, many had sledgehammers, so those who tried to go up against them were going to get hurt.

The looting happened sporadically across the U.S. There were reports about extreme looting not only in California but also in Chicago, Minnesota, and elsewhere. And in some instances, it led to injuries and even deaths because security guards were attacked.

The events of Black Friday seemed to be the gravy on top of everything that had happened throughout the rest of the week. As Breitbart News reports, there was mayhem all week in the Bay Area of California – with a three-night-long free-for-all. As one news outlet reported, 25 cars blocked the street in Walnut Creek so that looters could get into some of the high-end stores and get out as quickly as possible.

Many liberals justify looting…and they have been justifying it since the BLM riots that happened in the summer of 2020. The BLM riots then were related to the death of George Floyd. People were looting as a way to get attention and to spread the word that black lives matter.

But, what’s the reasoning for the looting now?

The Atlantic explained in September of 2020 that “Looting rejects the legitimacy of ownership rights and property, the moral injunction to work for a living, and the ‘justice’ of law and order.”

That’s likely what we’re seeing now, too. Black Lives Matter, the organization, is still alive and well. They don’t want to accept that we have to maintain law and order. They don’t want to have to work hard in order to succeed in life. And, they seem to want to punish people for owning property when they cannot.

This is the United States of America. Anyone and everyone is capable of living the American dream. It simply takes hard work and dedication. That’s where BLM has a problem, though. If you listen to enough of their rhetoric, black people aren’t made to work hard. Yet, there are countless black people who have gotten impressive jobs because wait for it, they’ve worked hard.

This is just a liberal expression of frustration because BLM has taught people that it’s easier to loot and cause chaos than to accept that hard work will get you a better position in life. And, we won’t even be surprised if the liberal politicians decide to let all of the looters go. After all, they were just looking for attention, right?