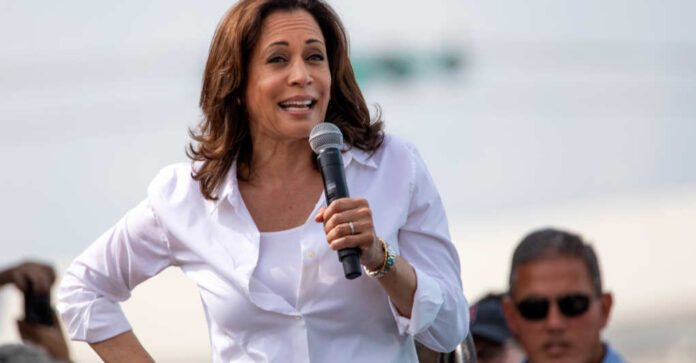 It’s pretty easy to see at this point that the Democratic Party is vastly unsatisfied with their choice of Kamala Harris for Vice President. But what can they do about it now? The answer, at least, at the moment, is nothing. After all, she has been contracted in for another three full years.

However, when we talk of what the future may hold, one option is being discussed at length, albeit a rather “nuclear” one.

Basically, it’s that rather than letting Harris assume Biden’s nomination from the party in 2024 and let her run for the presidency, again, they will try to convince her to take a seat on the Supreme Court, according to the U.K’s Telegraph.

To be clear, it’s not exactly the best move by the party, as it very clearly admits that the DNC messed up and in a rather big way. However, with abysmal approval ratings both for Biden and Harris, they aren’t left with many other choices.

According to poll numbers in early November reported by USA Today, only 28 percent of Americans approve of Harris as vice president. And per an average of 15 polls taken by Real Clear Politics, not much more than that, some 41.8 percent think Biden is doing a good job.

In a perfect world, they wouldn’t be having this problem, to begin with, as the first term president should be able to run again in 2024. But as we all know, this is far from a perfect world.

Biden is already 79, making him the oldest sitting president in the history of the United States. By the time 2024 gets here, he will be a whopping 82. And even without mentioning his age, there are rather serious questions about his mental acuity and fitness for office.

Usually, and again, in a more perfect world, such a situation would relegate the most viable option for the next presidential term to be held by Biden’s second in command and the current vice president. But as I mentioned above, it seems the Democratic Party isn’t too keen on that idea.

Well, as Biden announced early on in his presidency, Harris would be given a much more hands-on role than most vice presidents are. Her first task was to handle or attain some semblance of order along our southern border, as we clearly have quite the crisis on our hands.

However, she hasn’t done too well at it, has she? In fact, it took her some nine months before she even agreed to visit the border and see the problems firsthand.

Now, to be clear, this isn’t all her fault. After all, the situation is kind of a lose-lose for anyone tasked with it.

If she goes to the border once or even ten times and tries to represent the Democratic policy of an open border, she has to know she’s going to face some rather massive backlash from everyone who can clearly see the problem not being fixed by more lax rules. However, if she disagrees with the party on the subject or attempts to go against their wishes in any way, she is also put in a bad spot.

But clearly, doing nothing isn’t working in her favor either, as her approval rating proves. Instead, it just makes her look rather incompetent, both to the American people and to Biden, who has now somewhat taken the task from her and given her much lesser and behind-the-scenes roles.

Of course, the political left isn’t admitting any of this. As usual, they are pulling the identity card and claiming that Harris’ low approval rating results from her being a woman and one of color – you know the very same things that drew the Democratic Party to choose her as their VP candidate in the first place.

But the fact still remains that Kamala Harris is just not very well-liked, no matter what the reasoning. Save a scandal that forces her resignation, we are stuck with her for a while yet. However, it’s looking more and more probable that the presidency or even the vice presidency will not be an option for her come 2024. Whether the alternative is Supreme Court Justice seat or some cushy ambassadorship remains to be seen.