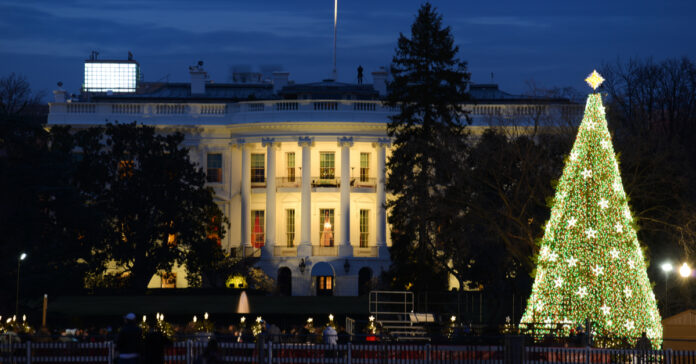 It’s Christmas time, and that means decorations are going up everywhere. City streets now feature Christmas trees in all shapes and sizes. Twinkling lights frame what seems to be every door and window. And at the White House, a new first family has just revealed their take on the holiday.

As usual, it’s quite a grand affair. After all, Christmas decorations can say a lot about one’s style, thought process, and traditions. And so, everyone is eager to see what First Lady Jill Biden has come up with to tell her family’s story.

However, if you were expecting anything like the decorations of the last few years, prepare to be massively disappointed.

Biden has titled her take on Christmas or the theme of the White House decorations “Gifts from the Heart.”

According to her, each room or space has been carefully decorated and “inspired by the acts of kindness and experience that lifted our spirits this year.” These themes include things like “faith, family, friendship, the arts, learning, nature, gratitude, service, community, peace, and unity.”

For example, the Library Room is adequately decorated in a “gift of learning” theme, complete with butterflies flying about. In the Vermeil Room, flowers, paint swatches, and wreaths were all supposed to represent the “gifts of the visual arts.”

The China Room, used house official china setting of past administrations, was decorated to represent the family traditions of the Biden holiday dinners in “Nana style,” according to CNN. The Christmas trees in the room focused on elements of supposed “friendship and caring,” and the centerpieces featured flowers and candles. In the Vermeil Room, flowers, paint swatches, and wreaths were all supposed to represent the “gifts of the visual arts.”

And while the idea of the themes isn’t bad, the general consensus is that the themes weren’t well executed. Instead, what was is seen is more of a hodge-podge of holiday-style decorations with no apparent pattern or sense of style.

From the color schemes to the types of flowers used and decorative items, the themes are vastly lacking. And in some rooms, they don’t really speak of the holidays or Christmas. Take the Library Room, for example. As I mentioned before, it’s decorated with butterflies, which aren’t typically used in any kind of Christmas décor.

Similarly, the China Room features yellow and purple flowers that remind us of spring rather than eating a holiday meal.

It’s almost as though Jill Biden didn’t really put much thought or effort into the decorations and simply used what she could find lying around.

Now, I know this is what many families around the US do in their homes for the holidays, as we all don’t have the budget of the White House. And there’s nothing wrong with that. But this is the White House, and we expect more than what mainstream media is calling a “normal Christmas,” don’t we?

I mean, do you remember the winter wonderland Melania Trump created in 2017? Trees dripped with glittering lights and snow. Others were adorned with pinecones and ribbon. And while many spaces had their own theme, as Jill Biden’s does, they were also all tied in together.

In 2018, the White House was just as equally adorned, featuring bright red trees in the hall and that same red tied into decorations in every other room in the House. It was a bit different, to be sure, and many accused her choice as being rather dark and inhospitable. But like her high fashion sense of clothing, it all paired well together and gave the House a sense of grandeur and wonder, just as it should be.

In contrast, Biden’s décor looks disheveled, haphazard, and even tacky. The colors don’t work together, the design is awkward, and it seems rather bland and boring at best. I mean, really, I’ve seen better décor at my small-town mall.

Then again, maybe it does represent the administration fairly well…