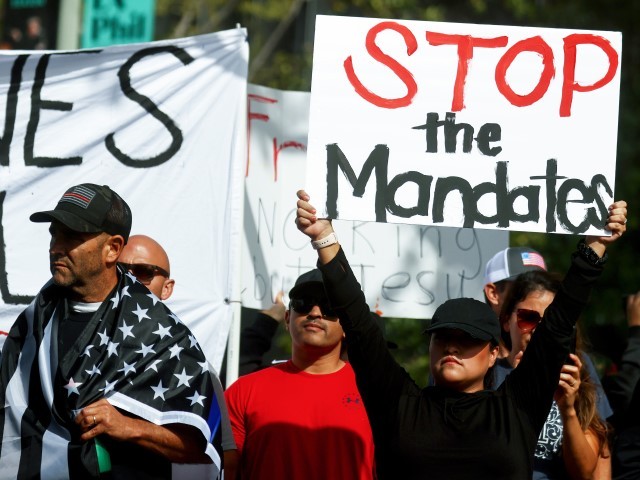 The survey asked, “Federal courts have ruled against President Joe Biden’s policy of making COVID-19 vaccine mandatory for certain employees. Should the federal government have the power to make vaccination mandatory?”

Most, 57 percent, said “no,” the government does not have that power, while 35 percent said “yes,” and eight percent said “not sure.”

The vast majority of Republicans, 81 percent, said the government does not have that power, and 63 percent of independents agree. However, most Democrats, 59 percent, believe the government does, in fact, have the power to make the coronavirus vaccination mandatory:

In September, Biden announced his decision to direct the Occupational Safety and Health Administration (OSHA) to develop a rule forcing employers with 100 or more employees to either mandate vaccines or implement rigorous testing requirements.

OSHA released the rule months later, which has since been suspended due to litigation. The U.S. Court of Appeals for the Fifth Circuit granted a motion to stay the requirement, prohibiting OSHA from implementing or enforcing the rule “until further court order.”

On November 12, 2021, the U.S. Court of Appeals for the Fifth Circuit granted a motion to stay OSHA’s COVID-19 Vaccination and Testing Emergency Temporary Standard, published on November 5, 2021 (86 Fed. Reg. 61402) (“ETS”). The court ordered that OSHA “take no steps to implement or enforce” the ETS “until further court order.” The U.S. Court of Appeals for the Sixth Circuit now has jurisdiction over ETS challenges and DOL has filed a motion to lift the stay. While OSHA remains confident in its authority to protect workers in emergencies, OSHA has suspended activities related to the implementation and enforcement of the ETS pending future developments in the litigation. Note that the comment period is separate from the litigation.