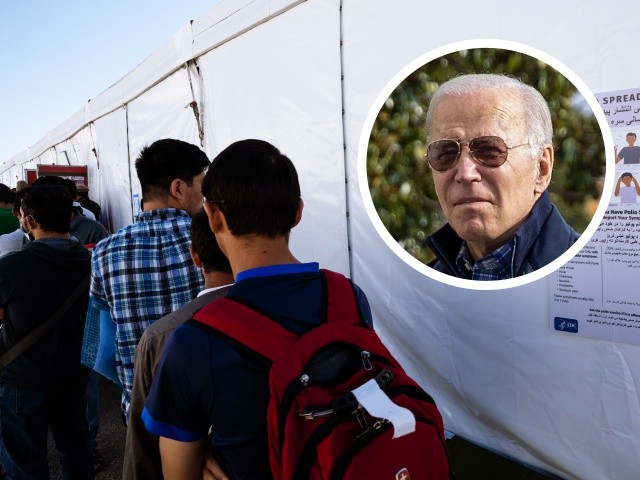 Fort Dix in New Jersey is among a series of military bases the Biden administration has turned into quasi-refugee camps where more than 70,000 Afghans have been temporarily housed after having been flown to the U.S. with minimal vetting.

The Biden administration hopes to bring a total of 95,000 Afghans to the U.S. with plans to resettle them across 46 states.

At Fort Dix, about 11,000 Afghans are currently being housed at the base with a constant stream arriving every week through the Philadelphia International Airport in Pennsylvania.

After fleeing Afghanistan as the Taliban seized power, she and her mother and four siblings were routed through Germany before arriving at what has become known as Liberty Village, a community that swelled nearly overnight to hold a population larger than half the towns in New Jersey. [Emphasis added]

It is the only location still accepting new Afghan arrivals from overseas, according to the Department of Homeland Security. It is likely to be among the last sites to shut down, based on its housing capacity and proximity to Philadelphia, the main U.S. port of entry for the new arrivals, officials said Thursday as they offered the first media tour of the encampment. [Emphasis added]

As many as four planeloads of Afghans continue to arrive in New Jersey each week from overseas safe havens where 3,300 people are waiting their turn to enter the United States as part of the largest evacuation of war refugees since Vietnam. [Emphasis added]

To date, according to the latest data, the Biden administration has resettled roughly 36,000 Afghans across the U.S. since September with another 37,000 Afghans still temporarily living on U.S. military bases awaiting resettlement.

At Fort Dix. alone, 3,500 Afghans have left the base for resettlement in the U.S.

Biden’s massive Afghan resettlement operation is about to see an even bigger boost thanks to Republicans and Democrats in Washington, D.C. Last week, 19 Senate Republicans and Rep. Adam Kinzinger (R-IL) voted with Democrats to give Biden an additional $7 billion in American taxpayer money to fund the operation.

With the new funds coming, Biden’s Afghan resettlement operation will cost American taxpayers more than $13.3 billion. The funds also ensure the operation has no end date. Specifically, the funding bill defines foreign nationals who say they have been impacted by the withdrawal in Afghanistan as “individuals at risk” who can take part in “relocations” to the U.S.

The nation’s Afghan population has exploded since former President George W. Bush started the Afghanistan War in 2001. The number of Afghans living in the U.S., for instance, has shot up to 133,000 in 2019 — more than three times the 44,000 Afghans who lived in the U.S. before the start of the war.

The data revealed also that most Afghan arrivals in the U.S. live on welfare.