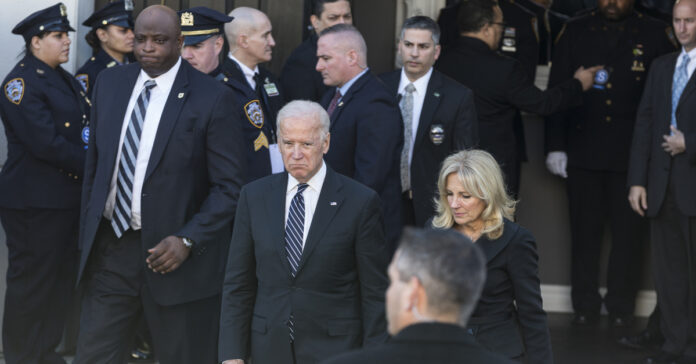 There is a new book on the market that goes even further in implementing Joe Biden and his family in some shady business deals. This information goes back much further than Hunter Biden’s connection with the Ukrainian energy company named Burisma. It seems that Joe Biden and his family have a history of using their power and position to leverage deals and seeing influence according to this new book.

Miranda Devine, a New York Post columnist, has written: Laptop from Hell: Hunter Biden, Big Tech, and the Dirty Secrets the President Tried to Hide. In this book, she gives details about how Joe Biden personally benefitted from his political influence in a number of real estate landfalls. It also discloses how almost everyone in Biden’s family has claimed a piece of the lucrative pie.

Devine writes, “While Joe Biden waged war on white privilege from the White House, his own family was the living embodiment of the worst of it. Joe has always made sure the Bidens lived a life of unearned privilege and entitlement under his beneficent patronage.”

The new book hit the bookshelves on Tuesday. The author writes, “Like members of a hereditary aristocracy, the Bidens would have access to the best America can give, the most prestigious educational institutions, internships, clerkships, scholarships, directorships, and government sinecures.”

Devine reveals that decades ago the Bidens decided that Hunter Biden would act as the family’s cash cow. Although the president’s son would have rather been an artist or a writer, he was assigned to the role of paying the bills for the rest of the family. To do this, he was given cash-plenty jobs and deals that were facilitated by Joe’s network of connections in Delaware and, later, throughout the world.

Devine discloses records from Hunter’s missing laptop that show he held 10% of a Chinese business deal for “the big guy.” This was from a quote Devine found in an email Hunter wrote to his oldest daughter, Naomi, in 2019. Hunter also wrote to Naomi, “I hope you all can do what I did and pay for everything for this entire family for 30 years. It’s really hard. But don’t worry, unlike Pop, I won’t make you give me half your salary.”

Joe’s son also allegedly complained to his aunt, who raised him after his mother’s tragic death, that the president co-signed on student loans for both Hunter and his brother Beau, but he expected them to be paid back in full. He wrote in an email that his father never paid one dime.

Devine traces back to the very beginning of these shady deals in Delaware. The first-term senator bought a 10,000-square-foot five-bedroom DuPont mansion with pool house, basketball court, and manicured gardens for $185,000 in 1975. In 1996, he would sell the estate for $1.2 million to John Cochran, the vice-chairman of MBNA. Several accounts suggest this was much more than the property was worth. Cochran apparently financed that gain while selling his own home in nearby Maryland at a significant loss. Fortunately, MBNA reimbursed Cochran $330,115 for making this happen.

The New York Times reported that the Bidens upgraded to their next mansion with the help of campaign donors and “bankers with an interest in legislation before the Senate, who bought his old house for top dollar, sold him four acres at cost and lent him $500,000 to build his new home.”

It was in this same year that MBNA gave Hunter Biden his first job fresh out of law school. He received a salary of $100,000 a year, as well as a signing bonus.

Joe Biden’s younger brother, Jimmy Biden, has been a lifelong beneficiary of the Biden name. “In the 1970s, as Joe was entering the Senate and taking a seat on the Banking Committee, James obtained unusually generous loans from lenders who later faced federal regulatory issues,” Politico reported.

When Biden’s brother Jim was asked if he was concerned that the family’s practices might put Joe’s presidential campaign at risk in 2020, Jim said that the Biden clan survives thanks to “plausible deniability,” Devine wrote in her new book.