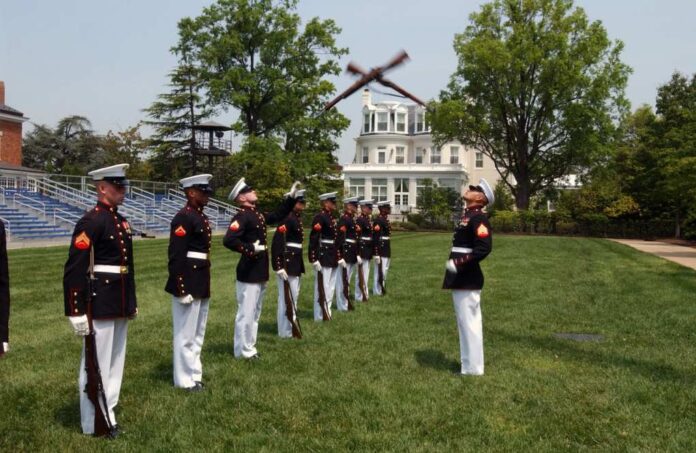 As you might know, tensions between the US and the communist nation of China are pretty high and have been for some time now. However, due to the increased action the eastern country has recently taken against Taiwan and continued allegations of genocide and human rights abuses, the likelihood of war is looking more and more possible.

And so, it would seem the United States Marine Corps is gearing up for that, if for no other reason than to be ready, should the time come.

Now, you might think this would mean the corps would be increasing recruitment or some similar measures. However, you’d be quite wrong.

Instead, they actually plan on cutting recruitment and the overall size of the USMC.

According to Military.com, the goal is to strengthen the corps, not simply have more bodies. And that means ensuring that those who enlist plan on sticking around for a while to provide years of experience.

As the outlet recently reported, about half of the USMC is made up of junior enlisted ranks, and most of those leave after just one four-year term. As Combat Development and Integration spokesman Major Joshua Benson says, about 20,000 junior Marines leave the branch each year.

The new plan is to incentivize recruitments to stay longer than the average four years, creating a more experienced and seasoned force overall.

And that plan starts with changing up the chain of command a bit.

Currently, small units are led by sergeants or corporals. But as Commandant General David Berger wrote of the Marines’ new plans in late April, these smaller groups really “need to be led by a staff sergeant.”

For those unfamiliar with Marine Corps ranks, a staff sergeant is the first of the senior ranking non-commissioned officers, typically with around ten or so years of service under their belt and the ability to command about 40-50 Marines.

“Putting staff noncommissioned officers in those roles will be a big cultural change for the service, which pushes leadership and decision-making far down the chain of command.”

As Lt. General Eric Smith, who is deputy commandant for Combat Development and Integration, says, “You can’t accelerate experience and maturity. If we’re going to be operating in a disaggregated environment where you have 75 Marines throughout the first island chain – at times under duress, in competition and in crisis – you need that really seasoned, mature decision-making capability.”

And according to him, “There is an age component to that” that cannot be sacrificed.

As talk of increased tensions with nations like China and even Russia continues, the corps acknowledges that their typical way of doing things may not work. Military.com notes that the USMC has spent the vast majority of their time and training on small-scale desert warfare tactics, fighting against the Taliban and ISIS in the Middle East for several decades now. However, China is a much different kind of threat.

According to Military.com, the USMC will now be focused on protecting US Navy ships, using “high tech unmanned technology” from land. Instead of firing artillery rounds from about 25 miles away and over deserts, the Marines will now need to possibly fire naval strike missiles from some 100 or so miles.

And as Smith says, “You want somebody who has done that a couple of times.” Hence the need for more experience and maturity farther down the chain of command.

So what does this have to do with recruitment cuts?

Well, as the outlet reported, and I’m sure you can imagine, staff sergeants, with a higher rank and years more experience, get paid about $1,000 more a month than the sergeants and corporals currently leading small units and infantry squads.

And since the corps will be needing more of those getting higher pay, cuts elsewhere need to be made.

This means recruitment will need to change as well.

Fewer recruits will be needed each year, but those that do enlist will be expected to stick it out much longer than the average one four-year term.

Smith says, “What this says to those potential recruits that are in high school right now is, ‘You’re going to want to bring your A game. You’re going to want to make sure that you are the most qualified.’” He continued, “If you wish to join the Marine Corps that’s doing these kinds of difficult, challenging tasks inside of the engagement one… it’s a competition. And I hope everybody’s ready to compete.”