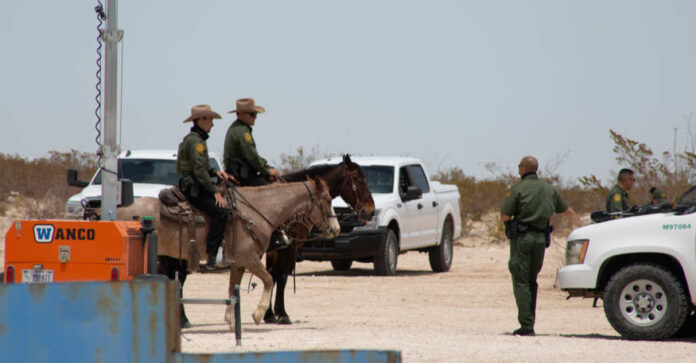 With illegal immigrants piling up at established border holding stations, the border patrol is already finding itself stretched to the very max of its limits. However, it’s about to get much worse as the border crisis part Deux gets ready to arrive; Biden’s vaccination mandates are coming into effect and the people are about to pay dearly for this.

Currently, 4,165 border patrol agents were identified as being unvaccinated at the 22 November deadline date. An astonishing 16,500 agents were fully vaccinated. Of these 4,165 unvaccinated 3,365 were seeking an exemption and 800 had not yet filed a request per Daily Caller News Foundation, who based this information off a document they were able to obtain. These are staggering numbers given how difficult their recruiting efforts have proven to be.

Vice President of the National Border Patrol Council Chris Cabrera has been speaking with DCNF extensively about this subject. Cabrera has not been holding anything back either. “A lot of guys have an 8 year, a 10 year window, and instead of waiting either halfway or all the way, they’re just pulling the trigger right away and jumping ship and getting out of the patrol because of this…And a lot of folks are leaving the agency and they’re not even gonna deal with this so it’s gonna be interesting to see how this shakes out.” He’s right too, this is about to get interesting.

As more and more illegal immigrants flock to the borders since COVID hit, the job of a border patrol agent has become more and more dangerous, and their work goes largely underappreciated and over scrutinized. Between the narrative of them ‘whipping’ immigrants, and the stories of alleged mistreatment, they are being attacked on all sides. With the Federal government attempting to remove medical autonomy, there are fewer reasons than ever before for someone to stay with the border patrol any longer than necessary.

The border will continue to get worse until Biden actually puts his foot down and enforces the border laws we have on the books, and maybe even strengthens penalties for breaking those laws. As we all know, that will never happen. He is a progressive Democrats real democrat. He hates looking bad in front of his cronies, and that’s all he ever does is look bad for the American people. However as it saves face with his party, he is all for it.

Partisan politics on the border patrol issue needs to go away. We have had enough time keeping up with the people already here, and with Biden wanting to pay the people stopped from just walking in under Trump a staggering $450,000 it’s going to get much worse before it gets better that’s for sure. As Biden gave no religious or medical exemption clause with his mandate for border patrol vaccinations, there is a lot of problems on the cusp of happening. People are trying to find the answers and to little or no avail.

One thing remains for certain; the people of America are slowly waking up and realizing what a mistake it was to elect someone like Joe Biden to this country’s highest office. We need a leader who actually leads. A leader who knows what he is doing at all times, and one who still has full mastery of the English language. Right now, Biden has nothing.