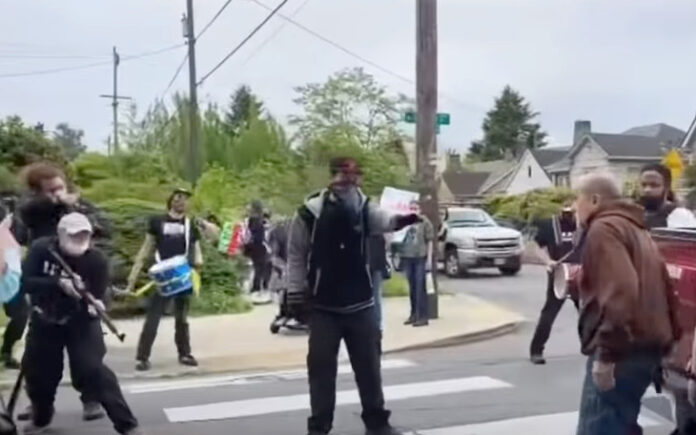 We’re supposed to sit back and watch as protesters continue with their violent streaks. As much as the liberals want to claim that the protesters are “innocent” and “peaceful,” the reality is a stark contrast.

Why is it that innocent people are getting beaten up any time that social justice warriors want to push an issue?

Black Lives Matter protesters are heavily armed – and they’ll harass anyone and everyone who stands in their way.

All over the country, protesters are prepared to stop motorists who are on their way to school and work. Why? Are the motorists the problem? Are they the ones that are not woke enough for the protesters? Nope. The motorists simply turned onto the wrong road because they didn’t know about the protest.

If social justice warriors were focused on all lives, they could do a lot of things.

They could invite the drivers to participate in the protest.

They could educate the drivers about the reason for the protest.

They could even show the drivers how to turn around so that they’re not intruding into the protest grounds.

Yet, the BLM and Antifa protesters don’t want to be civilized. They want to harass – and that means harming innocent people.

Such an instance happened last week in Portland. A handyman by the name of Joseph Hall made the unfortunate choice to turn onto a street where a protest was being held. He was on his way home from a job and was cut off by a moped. The moped followed him and it wasn’t long before BLM protesters cut off his truck.

The BLM protesters were armed, the handyman was not.

Why are BLM protesters armed if they are supposed to be peacefully protesting?

This is the question that the media won’t answer – and that’s because liberal politicians don’t want to answer. It puts them into a conundrum because they want to take away second amendment rights yet they want to allow the BLM protesters to continue doing what they’re doing.

Yikes, so is it that only liberal protesters can carry guns? Apparently so.

Hall explained how quickly the protesters turned on him. They trapped him in so that he couldn’t go forward or around the protest. “They’re screaming and yelling at me, claiming I was out there trying to run people over.”

BLM protesters shoved him around. He pulled a gun as a final way to protect himself. That’s when a rifle was shoved into his face. He was jumped from behind and, then, several jumped on him.

The protesters took Hall’s fun. He ended up with a broken collar bone, head trauma, five broken ribs, a partially collapsed lung, and other injuries.

Unfortunately, stories like Joseph Hall’s are all too common. The protesters harass anyone that stands in their way of having a “peaceful” protest. And Hall has said that he’s had enough of Portland.

The police don’t want to stop the behavior because they’re just as terrified of the rioters as everyone else. And, they’ve been defunded to the point that it’s difficult to work effectively.

Meanwhile, the politicians stand behind the protesters because they want to appear as though they care about the issues. Failure to support the protesters means risking being called racist.

On the day that Hall was harassed, plenty of others were being harassed, too. 911 calls were made numerous times – people had broken vehicle windows, damaged tires, and more.

And, this is happening around the country because liberals are failing to put an end to it all.

There’s no way that this is a peaceful protest when they are holding rifles. These protesters don’t want peace. If they did, they’d allow innocent motorists to turn around and leave them alone. They want division. They want to be the ones holding all the cards when it’s all over.

Many are leaving liberal cities because of such things – and if the liberals aren’t careful, they’ll start to see not only a mass exodus but also even more seats being lost in Congress.